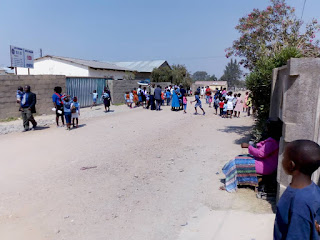 …factions lock each other out of church premises
Elliot Jinjika
CHIVHU - The factional fights bedeviling the Apostolic Faith Mission (AFM) in Zimbabwe escalated to extreme levels at the Devotional Life Centre (DLC) last Sunday when rival factions blocked each other from contacting church services.
At national level, the factionalism pits two rival groups; the anti-reform faction led by Reverend Cossam Chiyangwa and the reformists group led by Reverend Amon Madawo.
Both parties have so far failed to amicably co-exist despite the recent declaration by the High Court awaiting a declaratory order by the Supreme Court.
At the Chivhu DLC, TellZim News saw scores of believers scattered outside the church premises as the gate had been locked by the Madawo loyalists.
DLC Chivhu acting vice chairperson Osbi Nyikadzino, who is aligned to the anti-reform Chiyangwa faction, told TellZim News the other group breached an earlier agreement to share the premises.
“The Reformists did not give us an opportunity to use the premises and we persisted in vain until we decided to write a letter to their pastor Rev Nzombe and the non-executive chairman Elder Sithole but they both did not respond.
“It remained like that as we only used the venue on free days but they soon started locking the church altogether. On Friday (September 20), we went for a service and found the venue open but we were later shocked when the police came and told us we had unlawfully entered into the premise and a report had already been made by our reformist brothers,” said Nykadzino.
Sources said the police, however, had dismissed allegations by the reformists that the other group had broken into the church, stolen the PA System and some building materials.
The police, however, summoned representatives of both factions the following morning but the reformists did not turn up.
To resolve the matter, the Chiyangwa-led faction agreed with the police to lock up the premises until an agreement could be made. On Sunday, members of the Madawo faction came to church as usual but only to find the premises locked.
“We were shocked to discover that the church was locked. Even now the church is still locked. We feel this is ungodly evenly though we have not yet made an agreement,” said an elder who is aligned to the Madawo group.
Later on, members of the Madawo faction made a police report claiming they had sole rights to the premises but they were advised to co-exist with their rivals as per the High Court ruling of September 16.