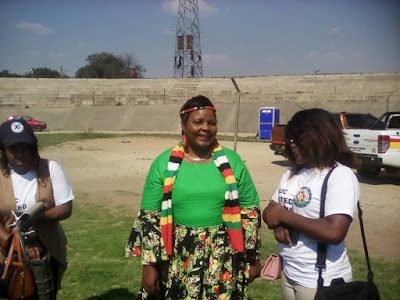 Ellen Gwaradzimba (centre) with party supporter at Sakubva Stadium
Felix Matasva
MUTARE – Buses sent by businessman Esau Mupfumi to ferry people from the high density suburbs to the so-called anti-sanction gathering at Sakubva Stadium last Friday ran largely empty as residents ignore the event.
Only a handful of people turned out for the local leg of the national event which was presided over by the Minister of State for Manicaland Provincial Affairs Ellen Gwaradzimba.
The train that was organised to ferry people to Harare for the main event at the National Sports Stadium reportedly carried very few people some of them only boarding the train to reach their own destinations.
Gwaradzimba tried to save face by claiming that the turnout was not bad although the stadium was largely empty. The few people who turned up showed greater interest in the available drinks, bottled water and bread than in the official proceedings.
The tents that had been reserved for VIPs were later occupied by ordinary people as the event turned out to be a flop.
Gwaradzimba however acknowledged that many people did not understand the meaning of the anti-sanctions demonstrations.
"The turnout is good and not bad for a start because people need more education.  I think as time goes on people are going to realise that this is a special day.
“This is a sizable group gathered here at Sakubva Stadium. I cannot really complain as I am happy that in Manicaland, the call for the removal of sanctions has been a success. Some people say sanctions are targeted which is not true since they are hurting everyone across the nation. There is need for awareness through various organisations including church, social gatherings, political leadership and educational institutions," Gwaradzimba said.
Manicaland Provincial Development Coordinator (PDC) Administrator Edgars Senza said there were plans to gather in future until Zimbabwe was free of Western sanctions.
“It is our intention that in future, we will continue to gather and speak with one voice until illegal sanctions against Zimbabwe are removed so that the country can drive its economic agenda without impediment," said Senza.
The proceedings in Sakubva started late with small kids enjoying music as officials waited in vain for more people to come.