Festive season— Who will tame the traffic jungle? 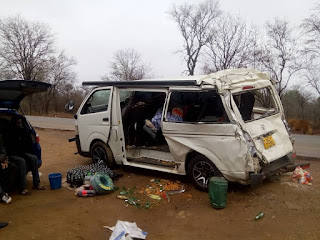 Clayton Shereni
Accidents are now an everyday common feature on our roads claiming hundreds of lives, leaving many injured, dreams shuttered and families destroyed.
Despite the poor road network in the country, the drivers have thrown caution to the wind pushing their vehicles to the limit and as the festive season is upon us the question is, Who will tame the traffic jungle?
The sanctity of human life on our roads is not respected even a little bit and you see both drivers and passengers cheering on recklessness.
All that was learnt at driving schools is discarded and a new rule book is followed, take the car to its maximum performance and arrive or die quickly. Unfortunately, some do not die and are left with life changing injuries.
The innocent are lost on the roads due to serious recklessness from both public transport operators and private cars.
Members of the public, Traffic Safety Council of Zimbabwe (TSCZ), Vehicle Inspection Department (VID), Zimbabwe National Roads Administration (ZINARA), the media fraternity and law enforcement agencies must work hand in glove in the efforts to put an end to avoidable road carnage.
First and foremost, it is one’s responsibility as an individual to make sure that you are safe and not exposed to the dangers of the world including accidents.
Members of the public must not sit back and relax while they are being overloaded in a vehicle but should refuse and disembark from the vehicle and must not also remain silent when the drivers are over speeding or drinking whilst driving as these circumstances award high chances of road carnage.
Road safety advocacy groups like the vibrant TSCZ should also intensify road safety campaigns by being visible along the country’s major highways throughout the year promoting safe driving and also advocate for stiffer punishments for reckless drivers especially unlicensed or drunk drivers so as to ensure that the safety of the masses is prioritized.
VID is one of the most pertinent arms which contribute largely to the safety of people as it has the sole mandate of licensing and monitoring drivers so it is their duty to improve the requirements and standards needed for one to drive a vehicle including making it a mandate for one to do a defensive driving course.
Although 90 percent of road accidents can be attributed to human error according to TSCZ, it can’t be ignored that the state of our roads is worrying and has contributed heavily to reckless loss of life.
ZINARA has the prerogative to collect tollgate revenue and also making sure that our major highways are serviced but little has been done towards that, instead road projects like the ever shrinking Harare-Beitbridge highway have been used to make political scores at the expense of the travelling public.
Calls have been made for ZINARA to pull up its socks and improve the state of our roads which will surely reduce accidents since some road users end up encroaching into each other’s lane while avoiding potholes resulting in fatal side swipe or head on collisions.
The media fraternity has the power to influence change in the country and if effectively used towards road safety it can help in reducing road carnage because it reaches out to the masses including the drivers and mostly the motoring public.
Law enforcements agents especially the police must descent heavily without fear or favour upon illegal pirate vehicles especially Toyota Wish which has now been labelled “witch” or “I wish to die” as it has claimed a lot of lives on the road.
Funcargo and Honda fit drivers are also packing members of the public over long distances risking excessive loss of life because these vehicles are not designed to be public transport vehicles.
However, it has been alleged that most of these illegal pirate vehicles belong to members of the police force and conflict of interest will surely prevail and reduce the level of law enforcement.
The government should also deploy some independent inspectors who will monitor the conduct of the police on traffic duty because allegations of corruption have been levelled against some members of the police force for accepting bribes from unlicensed drivers and also from those who will have broken the road rules prompting a lot of accidents to happen due to negligence.
Government should also move to monitor the vice of corruption amongst members of the judiciary on issues to do with road carnage as some drivers are walking scot free even after causing nasty accidents which claim lives.
With collective action and responsibility by every Zimbabwean citizen surely we will tame the traffic jungle and reduce the loss of life.