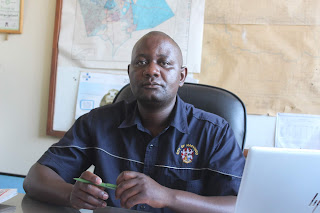 Acting town clerk Edward Mukaratirwa
Star Matsongoni
Masvingo City Council has secured land for a new dump site to replace the current one which is inside the two residential areas of Runyararo West and Victoria Ranch.
Residents have always complained about the discomfort of hosting a stinky dumpsite in the midst of residential areas.
City of Masvingo Mayor Collin Maboke recently told TellZim News the land was now available and that they were waiting for all the paper work to be done.
“I want to thank the Minister of State for Masvingo Provincial Affairs Ezra Chadzamira for working very hard for us to get the piece of land onto which we can build a new dumpsite.
“We are only waiting for the papers to be processed but the land is already there 10 kilometers from the residential area further down Victoria Ranch,” said Maboke.
Maboke said the dumpsite was long budgeted for and the only thing that had been delaying the whole process was unavailability of land.
He pleaded with the land developers not to give people stands close to the dump site again.
“I am asking the land developers not to allocate residential stands close to the dumpsite again like what they did in the past. We never thought there will be houses when we decided on the area of the current dumpsite,” said Maboke.