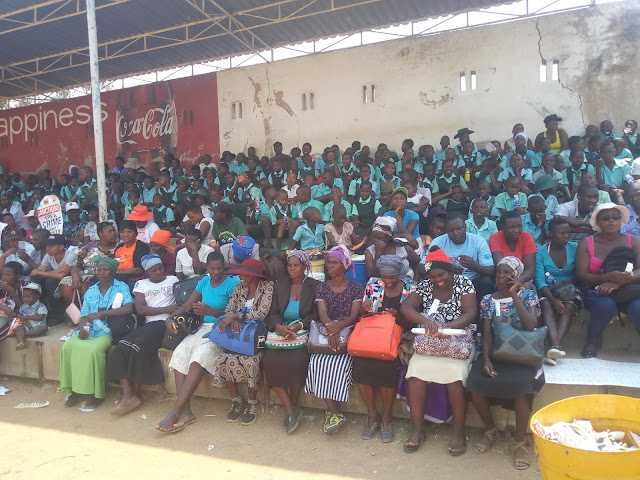 Courage Dutiro
\
MASVINGO - The anti-sanction demonstrations that ended with a rally in Mucheke Stadium were dominated by children bussed in from different schools to make up the numbers after residents largely ignored the event.
Government declared October 25, 2019 a public holiday to rally against sanctions imposed on select Zanu PF individuals and entities that the United States considers to be violating human rights and blocking the path to reform.
The marches were held in all the provinces, with the Minister of State for Masvingo Provincial Affairs Ezra Chadzamira leading the local event.
Both the provincial marches and main national event at the National Sports Stadium in Harare largely flopped.
The failure of the rallies to attract crowds was interpreted as a result of growing awareness on government’s blame-shifting gimmicks in the face of massive corruption, policy inconsistency and general management inefficiencies.
The forced involvement of children in the Masvingo rally was condemned by many people but Zanu PF Masvingo Urban Ward 10 Cllr Sengerayi Manyanga said there was nothing wrong with the move.
“These children came to the march so that they can get to know about the sanctions and their impact on the people of Zimbabwe. This is an initiative to catch them young since they are going to be the next ministers of this country. It is these pupils who will benefit from the removal of these illegal sanctions and it will be in their history,” said Manyanga, who is also the party’s provincial secretary for administration.
Zanu PF Masvingo provincial Youth chairperson Brian Munyoro said buses were used to ferry party sympathiser from across all the districts.
“Buses carried people from all the districts to this venue. Four buses in Gutu ferried people starting from the early hours of this day. Other districts also had buses that carried people to this venue,” said Munyoro.
In the stadium, Zanu PF affiliates including traditional chiefs, war veterans and leaders of the Zimbabwe Congress of Trade Unions (Zicosu) at the Great Zimbabwe University (GZU) took turns to denounce the sanctions before Chadzamira read the official speech.