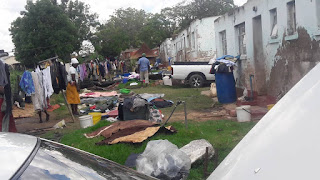 ZPCS Chivhu complex after the storm

Elliot Jinjika
CHIVHU - Several homesteads and institutions were devastated by heavy rains and strong winds that ravaged Chivhu town late yesterday (November 15), TellZim News can report.
Liebenberg High School was left in tatters after six block rooms were destroyed and asbestos roofs were wiped away.
The old National Foods depot was destroyed and much of the roof was shattered while the Zimbabwe Electricity Transmission and Distribution Company (ZETDC) offices suffered the same fate.
Many houses in Charuma residential area and surrounding places were also damaged.
Ten families at the Zimbabwe Prison and Correctional Services (ZPCS) cottages were destituted and had to seek shelter at the police station after their houses were destroyed.
ZPCS officers who spoke to TellZim News were in grief but they were pleased that no life was lost.
“We have so far send distress calls to Marondera and we expect them to come urgently together with the Civil Protection Unit (CPU). Things are not well as you can see and we need urgent assistance,” said one ZPCS officer.
“Some of us had to spend the night here at the police station but had to hire a guard against thieves that usually take advantage of this kind of a situation. We need urgent help because we have no shelter. We thank God that no one was killed or injured,” said another officer.