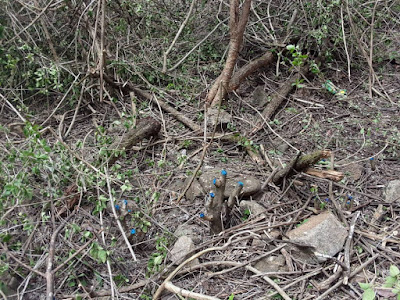 MASVINGO – Work has begun to eliminate the invasive Lantana Camara plant which threatens the beauty the Great Zimbabwe monuments.
The project began with the training of a 16-member team by a South Africa-based plant research council.
The work is being funded through a US$475 000 availed by the United States Ambassador’s Fund for Cultural Preservation.
The project involves the installation of a digital control system as well as the mechanical and chemical elimination of the unwanted plant.
Speaking to the media at the heritage site, South African Agriculture Research Council (SAARC) plant specialist David Simelane said they were training people to control the deadly plant species as a way of safeguarding the cultural heritage site.
“We want work to start here and make sure that the local community join hands and eradicate Lantana Camara. We are also doing similar projects in South Africa and we want the whole region to take part because if we defeat it in South Africa and leave it here or other neighboring countries, it will always find its way back to us,” said Simelane.
Great Zimbabwe monuments resident archaeologist Dr Tawanda Mukwende said they were using an integrated approach to deal with the plant.
“We are uprooting and cutting stems of the plant as well as using chemicals which we apply on the cut stems to completely kill the plant. Depending on the manpower available, we hope to complete the task within the shortest possible time,” said Mukwende.
Local management committee secretary Bothwell Mushayi said he was confident of the local community buy-in as all people acknowledged the negative impact of the plant.
“Our committee consists of people who live in the surrounding chiefdoms namely Nemamwa, Mugabe and Murinye. We will mobilise all villagers to take part so that we defeat Lantana Camara. I am very confident that our people will respond positively as they have always done when called upon to participate in efforts to preserve the monuments,” said Mushayi.
He said veld fires from bee hunters and roaming livestock constituted other threats to the monuments.