Ndanga Hospital laundry machines down for over two years 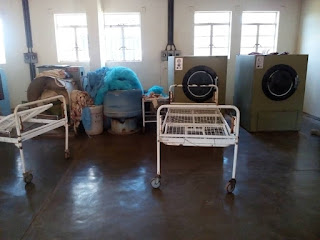 ZAKA - Machinery in the laundry room at Ndanga District Hospital has been down for the past more than two years, and staff at the health institution are using bare hands to wash even infectious linen, TellZim News can report.
The dire state of affairs at the hospital was revealed during a tour of the hospital by a team led by the deputy chief of mission at the United States embassy in Harare, Thomas Hastings.
The United States President’s Emergency Plan for Aids Relief (PEPFAR), through the Centre for Diseases Control (CDC), is funding the Voluntary Medical Male Circumcision (VMMC) program at Ndanga District and St Anthony’s Musiso Mission Hospital in the district.
After being taken through the facilities and processes involved in VMMC work, the team was further taken through other ancillary facilities of the hospital so that they could get a better appreciation of the hospital’s operations.
Zaka District Medical Officer (DMO) Dr Morgen Muzondo took the team through many critical areas of the hospital including the storage room for sterilized equipment and the hospital laundry.
The sterilized room’s roof is a near-ramshackle, with ceiling boards chipping off and the whole trussing system threatened by an infestation of termites that are gnawing away into its joints.
“As you can see, much of the ceiling has been damaged and we fear the roof might curve in due to termites. We try as much as possible under the circumstances to maintain high levels of safety and hygiene in all our facilities but serious challenges remain,” said Muzondo.
He said the roof could be attended to before things got worse by conducting extensive repairs onto its trusses and ceiling. 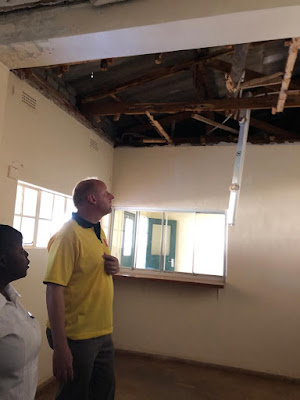 Muzondo said that work could only be done if the required materials and other resources are found.
“We would need to destroy the source of the termites, which has since been identified, first before we can do repairs on the roof. We will then have to find the materials needed to enable repair work to begin. We keep critical instruments here and our wish is for government to provide us with the money that is needed to do the work,” said Muzondo.
The team was also taken to the laundry room which last functioned optimally over two years ago, with the washing machines now standing derelict in a state of utter disrepair.
Muzondo explained that the equipment was very old and needed to be replaced altogether, rather than be repaired as that would require trying to find hard-to-get spare parts.
“The hospital laundry employees are washing the hospital linen manually using their hands. They just isolate the infectious linen from other linen material so that they are washed separately. Even material used for VMMC is washed here using the same technique. We can’t just sit around and mourn about our problems without doing something about it. We therefore look for other plans if things are not going the specific way we want them to go,” said Muzondo.
He said he was grateful that the government had installed a massive solar system that powers the whole hospital lighting system during load-shedding. In another positive, the hospital recently completed the refurbishment of its maternity ward
In his remarks, Hastings said he was impressed by the fighting spirit among the hospital employees whom he praised for doing their best in face of severe odds.
“We came here to understand the successes and challenges at the hospital with a special focus on the VMMC program which is being implemented with United States support. We are impressed by the work being done in face of the many challenges. It is our sincere hope that the issues that have been highlighted here are attended to as a matter of urgency as they involve human health,” said Hastings.
It was also learnt during the tour that the hospital incinerator no longer worked and medical wasted was being transported to Kwekwe on occasional basis for destruction.