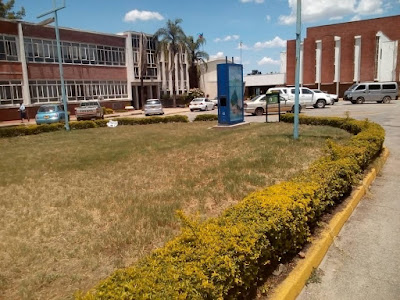 Masvingo City Council offices
Ruvarashe Chichera
MASVINGO – The local business community is fuming over the 2020 proposed licence fees proposed by Masvingo City Council and that are likely to be put to effect starting in January.
The business community is urging each other to write formal objections to the town clerk or else the new rates will be instituted starting from January 01, 2020.
Council has proposed an average 4 000 percent licence fees hike which will see  juice card vendors’ fees rising from  $210 to $3360, EcoCash agents from $510 to $8 160, traditional healers from $300 to $4 800, barbershops and for phone shops from $510 to $8 160.
The business community is arguing that the proposed rate increases are grossly exorbitant, thus unfair.
“The proposal of the council is unreasonable. They should consider that the business community is playing its part to the nation by employing people. They therefore should not make life hard for the business people but rather complement their efforts,” said one businessman.
Masvingo City Council chamber secretary, Vitalis Shonhai told TellZim News that council felt the proposals were justified but was quick to add that people had the freedom to make formal objections.
He went to advise that people should not waste time complaining from outside but should rather follow procedure by writing to the town clerk before deadline.
“That budget is only a proposal and it will only work if people agree to it. I urge people to take the right channel and communicate through formal processes rather than to waste time talking about it in WhatsApp groups. I can confirm some people have already sent their letters,” said Shonhai.
Business person Loveness Chimera, in her letter of objection to the town clerk, makes it clear that she cannot afford the proposed fee hikes.
“I cannot afford paying the money. We did not agree to the budget the day you came to meet us so I reject the proposal,” she argues.