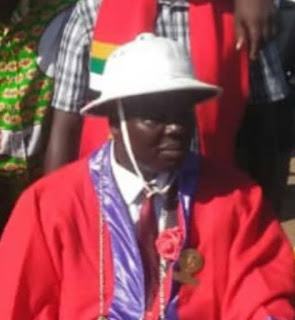 Chief Neromwe
Beatific Gumbwanda
CHIREDZI - Chief Neromwe has come out strongly against traditional male circumcision and a girls adulthood initiations rites that he said were not customary to people of his cultural identity.
Traditional male circumcision rites are performed widely in Chiredzi district but mostly by members of the Tsonga/Shangane tribal group.
Chief Neromwe, born Clemence Madzingo, is just but one Shona chief in a district dominated by Tsonga traditional leaders.
The restoration of the Neromwe chieftainship last year has caused severe friction with Chief Tshovani, born Hlaisi Mundau.
The revival of Neromwe saw Tshovani losing wards 17, 26, 27 and 28, leaving him presiding over wards 20, 22 and 32.
The four resettlement wards which were awarded to Neromwe were under Tshovani and were subjected to Tsonga cultural practices of hook (male circumcision) and komba (female initiation into adulthood).
Both cultural practices are practiced in the mountains under the cover of many taboos and superstitions that prevent external scrutiny.
Many people in the wards that were awarded to Neromwe felt the practices were alien to them and Neromwe now seems to have acted in response to their apprehension.
Speaking to TellZim News soon after obtaining a court order which bars Chief Tshovani from getting into his territory and interfering with his subjects, Chief Neromwe said the two cultural practices were now a banned tradition in areas under his jurisdiction.
“It was never our tradition. We will no longer allow any of that to take place in our community as it has been happening before,” said Neromwe.
Government and foreign donors are implementing medical male circumcision across the country, and they have in some parts of Chiredzi partnered local communities to improve traditional circumcision practices.