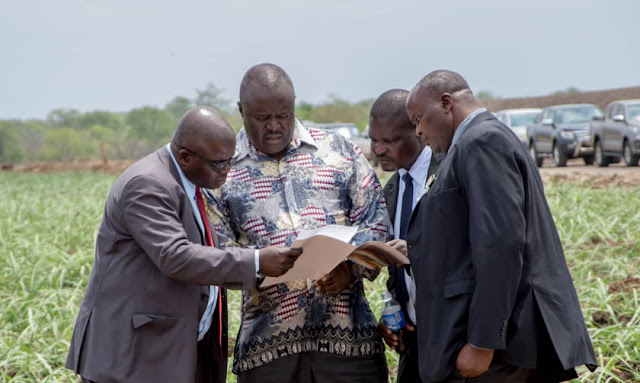 Neromwe (left) with Tshovani (right), Charmubira (2nd from left) and an unidentified individual during the launch of the Kilimanjaro Project in late 2019

CHIREDZI - Embattled Chief Tshovani, born Hlaisi Mundau, was recently banned from setting foot in Chief Neromwe's territory after the latter approached the courts seeking a restraining order against the former who had trespassed into his chiefdom and addressed his subjects, TellZim News can report.
Chief Neromwe, born Clemence Madzingo, approached Chiredzi Civil court applying for a restraining order against Tshovani whom he wanted banned from setting foot in his chiefdom after he had addressed multitudes of Neromwe subjects at Ditoi, challenging his chieftainship.
Chief Neromwe was officially installed as substantive chief by the Minister of State for Masvingo Provincial Affairs Ezra Chadzamira under the authority of President Emerson Mnangagwa.
The installation ceremony was held at Masimbaavanhu Primary School but Tshovani has been challenging the installation through in the courts of law.
The creation of Neromwe chieftaincy saw Tshovani losing Chiredzi Rural District Council (RDC) wards 17, 26, 27 and 28; leaving Tshovani with only wards 20, 22 and 32.
In his ruling, magistrate Rogers Mawarire said his decision to award the restraining order had been made after considering that the installation of Chief Neromwe was done by the respectful board involving the president of Zimbabwe, Minister of Local Government July Moyo and his permanent secretary, who are the authorities in that area.
Mawarire also said his decision was made after observing proximity, convenience, history and language spoken in the area, though the area is still yet to be gazetted as they are resettlement areas.
“Neromwe must hold fort to wards 17, 26, 27 and 28 until the government gazettes to identify who possessed the land because it is a resettlement area. This is meant to avoid anarchy and chaos,” said Mawarire.
He also said Tshovani’s lawsuits against the legitimacy of the Neromwe chieftainship had come at a huge cost to the new chief.
“Chief Tshovani is therefore barred from conducting any public meetings in Neromwe's territory or any form of gathering until the government gazette has been released.
“Tshovani has harassed Madzingo almost every time by challenging his chieftainship in courts and he should have not opposed the application. He also preached that his chieftainship was challenged and he has not been successful in all these legal battles therefore he has to pay back Chief Neromwe the resources he spent defending his rights,” said Mawarire .
Chief Tshovani is set to pay more than $200 000 to Chief Neromwe.