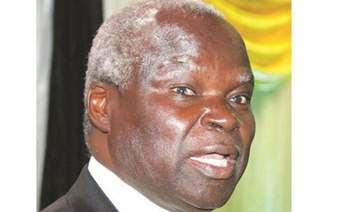 MASVINGO - Money released by the Ministry of Finance and Economic Development to local authorities under the devolution programme last year is reportedly being abused, with the Minister of Local Government Public Works and National Housing July Moyo being called to explain.
Presenting some of the Ministry of Finance’s to do list at the Zanu PF Masvingo Provincial Coordinating Committee (PCC) meeting on Sunday, January 19, Finance deputy minister Clemence Chiduwa said the money had fomented chaos among recipients as most do not know how the funds should be used.
Chiduwa said that his ministry had now decided to summon Moyo to help him with the guidelines on how local authorities should use their shares of the money.
“On devolution, we have a lot of challenges. Here in Masvingo it is better compared to other provinces. There are a lot of people who come to our offices to complain about how the devolution funds are being used.
“Early this week, we are summoning the Minister of Local Government to give him guidance on how devolution funds should be used,” said Chiduwa.
He said some people had devious intentions of abusing the money to further their own selfish political agendas.
“When devolution started, there were people with hidden ulterior motives who wanted to use the funds for campaigning purposes at the expense of our people. Let’s be weary of such individuals. Devolution funds should help our people,” said Chiduwa.
He said the Finance Ministry will soon be asking all the recipients of the funds to explain how they used the funds because abuse will not be tolerated.
“We are coming to see how the devolution funds have been used. The guidelines are coming when we meet with the minister this week.
“This move have been informed by what we hear and the input which is put by our legislators. We are going to make sure that the devolution funds are used appropriately, and are not abused by people who build houses or offices and buy cars,” said Chiduwa.
Local authorities are battling nonpayment of bills by residents, forcing some of them to misdirect the money to such non-critical areas as vehicle purchases, office furniture and construction of administration blocks.