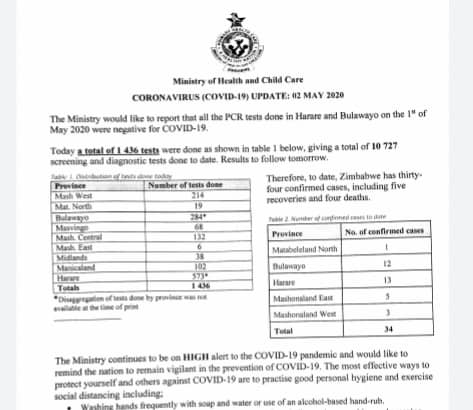 TellZim Reporter
Many people from Masvingo expressed disquietude after their province registered a prolonged absence from the daily Covid-19 test results table that is released by the Ministry of Health and Child Care, a situation which was later blamed on a shortage of test kits.
Masvingo last appeared on the national test results diagram on April 23 when 10 of the 460 national specimens tested that day were from the province.
This was then followed by an eight-day long hiatus which caused much concern until May 02 when national results showed that 68 of the 1 436 tests done on that day were from Masvingo.
Apparently, specimens that are sent to the country’s two testing centres; the National Microbiology Reference Laboratory in Harare and the National TB Reference Laboratory in Bulawayo are first tested at local isolation centres using Rapid Test Kits.
Currently, the province has 10 isolation centres across the seven districts but work is being done to establish the 11th one at Mashava Mine Hospital.
Specimens are then sent either to Bulawayo or Harare where confirmatory tests are done using a Polymerase Chain Reaction (PCR) system whose results are more reliable. This test uses sample mucus often drawn from a person’s nose or throat to trace the genetic material of coronavirus.
The first batch of Rapid Test Kits that provincial authorities received in mid-April got finished, and tests could no longer continue.
“We had run short of tests kits but we have now received another batch so we will resume testing today (May 02). Our specimens are now being sent to Bulawayo for confirmatory tests because Harare is congested,” said Provincial Medical Director (PMD) Amadeus Shamu.
There is, however, another nagging problem: the acute shortage of personal protective equipment (PPE) at all hospitals and clinics, a situation which puts nurses, doctors and other staff members at great risk.
Early last month, the body of a woman who died after exhibiting Covid-19 symptoms at Chiredzi General Hospital spent almost two days on the deathbed after nurses refused to take it to the mortuary as they were not sufficiently protected.
The woman, however, posthumously tested negative for coronavirus.
In mid-April, government pledged a ‘mass testing’ programme for citizens, promising to conduct 40 000 tests every month but that seems too hard a target considering that the daily averages of recent days have been far off the mark.
Shamu said only frontline health staff and those that met the criteria of clear suspected cases were getting tested, and the service is not yet available for random walk-ins.