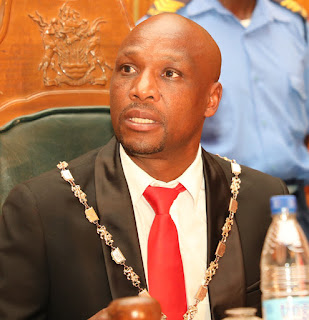 MUTARE – The mayor of scandal-ridden Mutare has lamented bad publicity the city has received in recent weeks, saying efforts to attract new investment were now in jeopardy.

A leaked council document recently went viral on social media after journalist Hopewell Chin'ono uploaded it on Twitter, accusing council and the Minister of State for Manicaland Provincial Affairs and Devolution Dr Ellen Gwaradzimba of corruption.

The document was a memo by Director of Housing to a special meeting, recommending council to parcel out  stands to several people in Gwaradzimba's office.

Many social media commendators have lashed out at the MDC Alliance-led council saying it was presiding over a deeply corrupt adminstrative system.

"Media reports accusing Mutare councillors of engaging in corruption are hurting our local authority's public image. We end up losing investors after those reports of mismanagement by city fathers.

"Negative publicity has got nagative implications on Mutare City such as failure to attract investors. The current management is trying to engage partners but negative reportage is hampering our progress," Tandi said.

He also sought to clear council of all wrong doing.

"We don’t allocate stands on the basis that someone is a civil servant. As council, we aim to accord everyone affordable accommodation without giving any special favours.

“We consider a lot of things though our stands manual allows us to allocate land to government officials working in Mutare.  Everyone is free to apply for a stand and Council will allocate them if land is available," Tandi said.

He acknowledged that the leaked document was aunthentic.

"Since 2016 after a forensic land audit report, City of Mutare stopped the sale of stands as it was putting its house in order so that the process is done under the confines of the law.

"From 2016, we have [had] a remarkable number of people who applied for stands from City of Mutare with police, soldiers, individuals and companies included. When we resumed sales of stands, the Housing Director wrote a report asking council to consider government officials in the allocation process," said Tandi.

Mutare Residents and Ratepayers Association coordinator David Mutambirwa said it was crucial for the local authority make official information more accessible to promote a relationship based on transparency and trust.

"As long as council is run in secrecy, residents will not have a sense of ownership and that impacts on revenue collection. As long as there is no access to information with regards to budgeting, procurement processes, recruitment and dismissal of staff; then effective and efficient service delivery will be a mirage," said Mutambirwa.