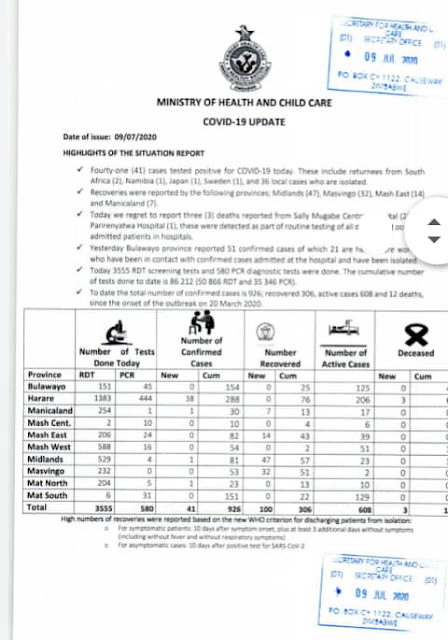 Only two of Masvingo province’s 53 confirmed cases of coronavirus are still active, after most of them were certified fully-recovered mostly in terms of the World Health Organisation (WHO) new guidelines on determining recovery.

On July 08, the province set on 34 active cases, only for the number to drop to two the following day after government published the cumulative national recovery tally which stood at 306.

The previous day, the national recovery tally had been recorded at 206.

Symptomatic patients are discharged after a minimum of 13 days which include a minimum of 10 days after the onset of such symptoms as fever and respiratory symptoms, and an additional three days without symptoms.

For those without symptoms can be discharged 10 days after testing positive.

In other words, patients who show no symptoms 10 days from the day when the symptoms first show, plus at least three additional days without symptoms including fever and respiratory troubles, should be considered as having recovered.

For asymptomatic cases, that is patients who test positive but show no symptoms, recovery is confirmed 10 days after the initial positive test for Covid-19.

Zimbabwe had been following an earlier WHO recommendation to confirm clearance of the virus, which saw people being forced to self-isolate for an average 21 days. This required a patient to be clinically recovered, that is show no symptoms, and to have two negative Polymerase chain reaction (PCR) results on samples taken at least 24 hours apart.