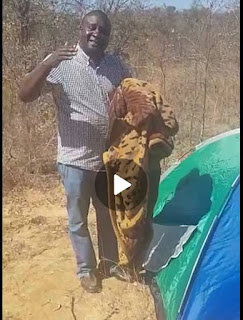 Former Zanu PF Chivi South Member of Parliament (MP) Killer Zivhu says he is now living in the bush for fear of what might get to him should the protests planned for tomorrow (July 31) get out of hand.

In a recorded video doing the rounds on social media, Zivhu says he has relocated to the bush, and he also urges those who might be tempted to join the protests to flee to the bush so that they could get as far away as possible from where it will happen.

Standing in the bush next to a backpacking tent with a blanket in hand, Zivhu warns people ‘not to let individuals that are getting money to incite them to remove their democratically-elected government’.

“Tomorrow is 31 July, don’t be incited into getting onto the streets. If you feel you might be tempted to end up on the streets out of curiosity of what gathered people would be doing, better flee into the bush. I myself am now living in the bush; I have relocated to the bush today.

“Don’t get incited to removing a government which was voted well into power, don’t be incited to remove your own President by people who are of no help to you. Don’t be driven around like cattle being taken for hot-iron branding, you would be exposing yourself to needless harm,” Zivhu says.

On June 10 this year, Zanu PF announced Zivhu’s expulsion from the party after the national disciplinary committee convicted him of jumping the gun by using social media to advocate for dialogue between President Emmerson Mnangagwa and opposition leader Nelson Chamisa.

He has however said he remains Zanu PF at heart and will always support Mnangagwa whom he claims is surrounded by sycophants that are sabotaging his efforts to make the economy right.