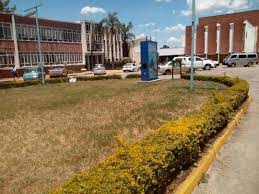 City of Masvingo police details on Friday, July 17, impounded vegetables from a Zimbabwe Prisons and Correctional Services (ZPCS) truck which was parked in the opposite Home Base contacting business at an undesignated selling point.

Pleas from prison officers who were manning the truck to be spared since the produce belonged to government fell on deaf ears as council police insisted that they were doing business illegally.

Other officers also accused the ZPCS team of contravening the Covid-19 national lockdown regulations promulgated by the same government as well as City of Masvingo by-laws forbidding illegal vending.

“We are just doing our job without fear or favour. The CBD is not for vending so you are supposed to go to the places designated for vending,” said one of the council police officers.

After council police refused to back down, the ZPCS team capitulated and could only watch as all their merchandise got carried away.

When contacted for comment, Officer Commanding ZPCS Masvingo Province, Senior Assistant Commissioner Social Ndanga denied knowledge of the incident saying those who were selling the produce were most probably doing it as individuals and not on behalf of the organisation.

A source privy to the incident, however, said the produce, which included king onions and other vegetables, indeed belonged to ZPCS.

“They ignored our first warning when we impounded their vegetables and advised them to go and ask the housing officer at Mucheke admin offices for an appropriate selling space. Instead of complying after we released their goods, they went back and continued selling.

“We were shocked as we did not expect such behaviour from members of a key security arm of the state during this lockdown period. We then impounded their goods again and this time we took it to our offices where they await destruction on Monday 20 July,” said the source.

When contacted for comment, City of Masvingo public relations officer Ashleigh Jinjika requested for comments to be put in writing but had not responded by the time of publishing.