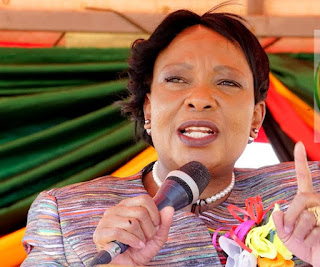 First lady Auxillia Mnangagwa had to spring to the defence of security forces after a villager publicly told her they were responsible for returning citizens who are dodging quarantine.

During an engagement with hundreds of people who turned up at the Masvingo Agricultural Show Grounds on Thursday, July 16, a villager from Chivi North stood up and blamed soldiers and police officers at the border for taking bribes from border jumpers that want to avoid mandatory quarantine.

The First Lady is on a nationwide ‘Covid-19 awareness campaign’ and Masvingo was her fourth destination with Bulawayo being her next stop.

“The cause of the increase in Covid-19 cases is corruption at border posts where illegal crossing activities are happening.

“After crossing into the country illegally, border jumpers go to the rural areas and stay there. Please mother, the security should be tight and they must desist from accepting bribes, the security is hurting us,” said Madziva.

In her response Mnangagwa, who was moderating the discussion, had to stop Madziva from making further accusations and told him not to divert from the subject matter of the day to further his own agendas.

“A mother won’t speak like that because security officers are her children. Can a mother say that her children are being given bribes? Zvinotaurika izvozvo? These children are hardworking, do you know how long Limpopo (River) is?

“These children are not sleeping. When you are sleeping in your blankets, they are walking, even when it’s cold they walk so that is not how we want to appreciate their efforts.

“What we can do is to encourage them and thank them for enduring hard times to keep us safe. We can’t say you are being hurt by the security forces.

“Recently, they did a good job and intercepted border jumpers. My visit is not about that, I don’t want such issues to be discussed here. Don’t try to divert the subject of the day by coming with a hidden agenda,” said Mnangagwa.

Her statements came at a time when President Emmerson Mnangagwa has issued a recorded video statement saying his government did not tolerate corruption at any level.

Her visit to Masvingo saw many people benefiting from her Angel of Hope Foundation which donated hampers to hundreds of people living with disabilities and the elderly.