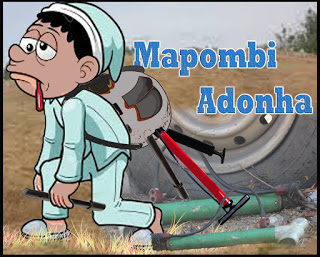 Uya akati nyika ino inenge yakanokorwa tsoka aripi. Kunonzi kutanda botso chaiko. I hope the Lord upstairs will have mercy on Zimbabweans as we have had our fair share of hell on earth. But dziblaz ED zvimwe zvadzinombotaurawo sometimes is what makes us suffer like this. How can you say the Lord upstairs referring kuna Mwari Baba nhai iwe ED? This is the same man who said his government is so good that chero kudenga hakuna yakadaro. Some of the problems we are facing today as a country are largely caused by these zealots who speak with their foot in the mouth kana vagutisa havo nyemba. Isu takungofira zvivi zvavo, dai Mwari watinzwira ngoni. Mapombi will pray hard for this country. I will be embarking on a month long dry fasting for this country. I hear vamwe vachiti Mapombi talks too much does she not fear to be beaten, tortured or killed but kusiri kufa ndekupi. Mwana asingachemi anofira mumbereko. Ndinobviro taura chokwadi kkkk. But that guy called Van Choga mukati dzakanatsa kuti kwesere here. Anhu arikuona moto arikuona ndondo. This is the legacy Zanu PF is leaving behind. A trail of destruction. The whole country is going mad and Van Choga is there for everyone to see kkkk.

Mapombi’s diet is difficult to come by these days with the closure of Chitima market. Hakuchina mabanana akaora and Mapombi is on the verge of starvation. Where did we go wrong fellow Zimbabweans? Inga ivhu takatora wani and we are now in control of all the farms. Zimbabwe used to be the bread basket but now rangova bhasikiti ratizirai. Kudakwashe Bhasikiti uriko here uko. This guy used to be powerful mhani. But unfortunately he found himself in the wrong basket and has now joined the bitter losers in the opposition basket kkkk. Mapombi misses you Bhasikiti and I hope mabhuru mango arikuita kupurazi rawakabvuta kuMwenezi uko. I am not the one who coined the term mabhuru mango kkkk. It was the late Shuvai Chikoforo Mahofa. Ko chirungu chaisatamba paya. Rest in power Shuvai Mahofa. Masvingo and the nation at large has been left poorer and I wish you were alive today to see how much of a failure the man you supported has turned up to be. Mahofa was a rare breed of women to ever dominate the political scene in the country. She was a true iron lady. Mapombi being a woman, pays tribute to Shuvai. A hero par excellence but she was again in the wrong basket and history will judge her as the woman who stood firm for the wrong team which has destroyed this country. The true heroes we celebrate today are the brave men, women and children who have managed to survive the Zanu PF maladministration for the past so many years. Vamwe vatochemebera vasina kana kumbobata pay slip.

It is very difficult to oppose a system that is well protected by the army and police. I wonder what these brothers and sisters in uniform are benefiting from supporting and protecting Zanu PF. Vamwe mukoma ndakaona vane uniform yapera muto ine zvigamba all over neshangu yapera sole. So I wonder why these guys beat up people who try to better their welfare. The army and the police should be for the people not political party. Mukai vana mukoma nana sis. Wake up and smell the coffee. This country cannot keep on this trajectory. Hanzi naKasukuwere ED is leading this country down destructive path and the soldiers and police are complicit. I’m sorry if I have offended you vana mukoma. Ndichiri mwana ndinoda kudzidzawo kkkk but I will tell you the truth. You can bring your guns and come shoot me. Ndiriko kuChitima I am not afraid anymore. Grace Mugabe mukati mupenyu here kkkk. I am sure everyone misses that woman. She was all drama and I am sure the likes of Vharazipi should rope her in into one of their plays and let her take the role of Mbuya Mai John. She will carry that role perfectly because she is feisty. Grace aipenga hake but she was right. People should not fear their army and the army has no role in politics. Let them defend our territorial integrity kwete kuswero vhima innocent civilians who are demanding better living conditions which would even benefit the soldiers and police.

We cannot let the army dictate everything for us. Command this, command that. We cannot live in fear in our country. Fear to speak out against corruption. Our people have suffered enough and or lives matter mhani imi vanhu. Mapombi borrows the following words from the great Charlie Chaplain in a movie the ‘Great Dictator’. “We want to live by each other’s happiness; not by each other’s misery. We don’t want to hate and despise one another. In this world there is room for everyone and the good earth is rich and can provide for everyone. The way of life can be free and beautiful. But we have lost the way. Greed has poisoned men’s souls, has barricaded the world with hate; has goose-stepped us into misery and bloodshed. We have developed speed but we have shut ourselves in: machinery that gives us abundance has left us in want. Our knowledge has made us cynical, our cleverness hard and unkind. We think too much and feel too little. More than machinery we need humanity. More than cleverness we need kindness and gentleness. Without these qualities, life will be violent and all will be lost. The internet has brought us closer together.

The very nature of this technology cries out for the goodness in men, cries out for the universal brotherhood and unity of us all. Even now, Mapombi is reaching millions in Zimbabwe and across the world, millions of despairing man, women and little children, victims of a system that makes men torture and imprison innocent people. To those who can hear me I say “Do not despair”. The misery that is upon us is nothing but the passing of greed, the bitterness of men who fear the way of human progress: the hate of men will pass and dictators die and the power they took from the people will return to the people and so long as men die, liberty will never perish.

Soldiers! Don’t give yourselves to brutes, men who despise you, enslave you- who regiment your lives, tell you what to do what to think and what to feel, who drill you, diet you, treat you like cattle, use you as cannon fodder. Don’t give yourselves to these unnatural men, machine men, with machine minds and machine hearts. You are not machines. You are not cattle. You are men. You have the love of humanity in your hearts. You don’t hate- only the unloved hate. The unloved and the unnatural. Soldiers- don’t fight for slavery, fight for liberty.

In the seventeenth chapter of Saint Luke it is written: “the kingdom of God is within man”. Not one man nor a group of men- but in all men- in you. You the people have the power, the power to create machines, the power to create happiness. You the people have the power to make this life free and beautiful, to make this life a wonderful adventure. Then in the name of democracy let us use that power- let us all unite. Let us fight for a new world, a decent world that will give men a chance to work, which will give you the future and old age and security.

By the promise of these things, brutes have risen to power, but they lie. They do not fulfil their promise, they never will. Dictators free themselves but they enslave the people. Now let’s fight to fulfil that promise. Let us fight to free the world, to do away with national barriers, to do away with greed, with hate and intolerance. Let us fight for a world of reason, a world where science and progress will lead to all men’s happiness. Soldiers- in the name of democracy, let us all unite! Mboko imboko.