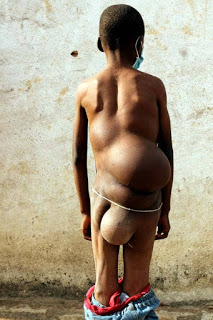 Exsto Makunzva
ZVISHAVANE – Ten-year-old Tafadzwa Jabangwe, who had massive lumps on his back, was successfully operated at Karanda Hospital on August 06 2020.
Tafadzwa’s story was published by TellZim back in July, leading to many donations pouring in from as far as overseas countries. The boy is now recuperating at home in Chetura village under Chief Mapanzure in Zvishavane district.
Shekinah Glory Organization spearheaded the fund-raising effort to cater for the boy’s medical expenses. Juliet Bvekwa, who is director for the Zvishavane-based Non-Governmental Organization (NGO), thanked everyone who made a contribution towards Tafadzwa’s medical operation.
She told TellZim that after reading his story, many companies and private individuals swiftly responded to pleas to help Tafadzwa undergo surgery.
“I am humbled by the way people responded and gave a hand to Tafadzwa. Today I want to inform the world that Tafadzwa is now at home and is doing very well. The lumps were removed and the doctor said the infection was in his blood and he also said there were two more lumps in his stomach.
“The total amount of money donated to Tafadzwa was US$4 130, R500, ZWL$16 330 in EcoCash and ZWL$70 in cash. I also want to thank TellZim for the publicity. We have worked together very well with TellZim and part of the donated money came through their Masvingo office.
“The story they published went a very long way in publicizing Tafadzwa’s predicament. The story was read all over the world. We didn’t even know that their stories are even read overseas,” said Bvekwa.
Tafadzwa’s father, John Jabangwe said prior to his son’s condition getting publicised, he had not known that there was so much compassion in the world.
“I had lost hope. I want to thank Shekinah Glory for everything they did for my son. I also want thank everyone who put hand in order for my son to be operated on,” said Jabangwe. To read the first story on this matter, use this link http://www.tellzim.com/2020/07/zvishavane-boy-pleads-assistance-to.html
Share !