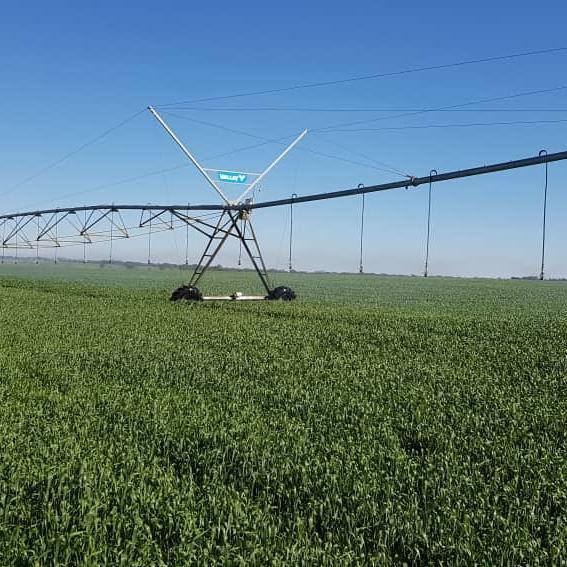 The minister of State in Vice President Kembo Mohadi’s Office and Masvingo North Member of Parliament (MP) Davison Marapira has taken the lead in making sure that the country saves millions from importing wheat by putting about 60 hectares under winter wheat production.

In May, Vice President Constantino Chiwenga who chairs the Cabinet Food Security and Nutrition Cluster, launched the 2020 Command Agriculture winter wheat planting programme, with a set national target of 416 000 tonnes.

Marapira said that he has done his part in making sure that Masvingo province contributes to the set national target but bemoaned water shortage as the biggest impediment to his farming.

“I have put 60 hectares of land under wheat production out of my arable irrigable land of 220 hectares under Valley Centre Pivot.

“I am expecting yields of 9 tonnes per hectare which gives me a total of plus or minus 540 tonnes of high quality wheat.

“I have a serious challenge of water to cover the 220 hectares in winter season.  I am harvesting water wherever it is possible through construction of weirs.

“Of late, l have drilled 12 high yielding commercial boreholes.  I have constructed an overnight storage or reservoir which will store 7 megalitres of water. This will help a lot in providing water to the 220 hectare center pivots,” said Marapira.

Under the programme, about 80 000 hectares across the country are expected to be put under winter wheat.

The targets were set according to each province's capacity and comparative advantages.

Masvingo province alone has a target of 4 160 tonnes of wheat under 800 hectares.

Matabelaland South is expected to plant 700ha and produce 2 000 tonnes while Matabeleland North will grow 2 000ha with an estimated harvest of 10 400 tonnes.

Marapira said the country is blessed with abundant water bodies but bemoaned to poor management of such a resource saying it is time the precious liquid is put to good use for the benefit of the people.

“Wheat is used as raw materials for bread making and a lot of other materials used in the food industry.  Its byproducts called wheat brand is used for stock feed.

“It is very unfortunate that although we are blessed with abundance of water in Zimbabwe we are very bad users of water.

“We allow water to go to the oceans instead of using that water for irrigation of wheat to stop the country from importing wheat and save the much needed foreign currency to import critical essentials which we can't produce as a country.

“The country uses plus or minus US$300 million in the importation of wheat, flour and other wheat products which can easily be produced by our industry,” said Marapira.

He said that the government must make sure that all people with farms are producing and not just holding land for speculative purposes.

“All farmers with good water reservoirs who are not producing should have their farms recovered and allocated to people with good management and capital to run these farms.

“There should be serious production and productivity on all farms for the country to realize good foreign currency inflow, employment up to 70 percent, food security and generation of raw materials for our industries,” said Marapira.