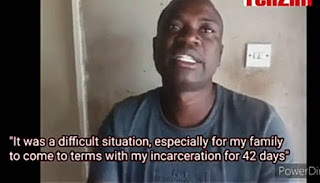 MDC Alliance national youth organiser, Godfrey Kurauone has lamented conditions at Masvingo Remand Prison, saying they were meant for animal and not as penitentiary for human beings.

Speaking in an interview with TellZim News after his release from the correctional facility, Kurauone said the experience has left on him an indelible imprint of grief.

“More often than not, there were over 30 of us in one small cell at a time and there was never a time we were less than 20. All those social distancing rules being encouraged are completely impossible to adhere too because we were overcrowded.

“We were given lice –infested blankets and horrible food usually sadza and spinach or badly-cooked beans. That was our daily bread and as I look back, I cannot help but feel sorry for fellow inmates whom I left behind, some of them wrongly-accused,” said Kurauone, who spent 42 days in remand prison on accusations of obstructing the free movement of traffic in relation to the abortive July 31 demonstrations.

Kurauone was acquitted on the charge on September 10, with another charge of criminal nuisance having been dropped earlier in the course of the trial.

In an example Kurauone said showed persecution through prosecution, he had been denied bail three times by the Magistrates' and High courts before his acquittal.

Kurauone said basic hygiene was impossible to practice in remand prison, with dozens of inmates sharing a dilapidated toilet and filthy bathroom.

“They did not allow me to receive food and toiletries from home citing coronavirus so I had to manage without such basics as tooth brush and toothpaste. I think the coronavirus excuse was being abused to deny prisoners their right to dignity because prison warders and other staff members still live in the usual communities. They commute to and from work every day without any special arrangement for them. Their interaction with inmates remains the same so I don’t see the logic of banning loved ones from delivering food and toiletries to inmates,” said Kurauone.

He said due to the political nature of his case, he was a sort of an outcast among others as most inmates avoided being friendly to him for fear of victimisation.

“At one moment, an inmate gave me his bed sheet to use and when the prison guards came for their routine inspection and found me with the sheet, they went mad. I felt sorry for that fellow because they made his life miserable. One prison guard confided in me that they had received a call from their superiors in Harare questioning why an MDC person was being given special treatment,” Kurauone said.

He said he will not shy away from fighting for human rights and a better life for all citizens despite the attendant risks.