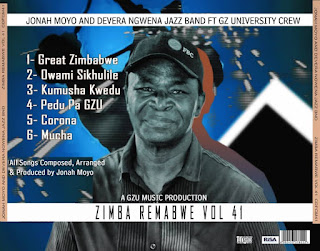 Great Zimbabwe University (GZU) has scored a first by producing a music album with veteran artist Jonah Moyo and Devera Ngwena Jazz Band in Masvingo. The six track album titled Zimba reMabwe Devera Ngwena Vol 41 is due for release any time from now.

The bass line and brass fusion on the album has brought new flavour to Devera Ngwena beat affectionately known as Tsava Tsava.

Moyo, who composed, arranged and produced all songs, told TellZim News that he was glad with the opportunity that the university gave him.

“I am now working at Great Zimbabwe University so the authority approved my students and workmates to be part of Devera Ngwena Vol 41. We are planning to launch the album at a date to be advised,” said Jonah Moyo.

“We shall produce videos of the album after its launch. I urge fans to help us celebrate the offering which I am sure will taste like milk and honey,” said Moyo.

Jonah Moyo’s music career goes back over 40 years and during his peak, he toured countries like Belgium, United Kingdom, Holland and Germany.

Devera Ngwena was formed at Gaths Mine in Mashava when Moyo responded to an advert by the mine to have a band in 1977. The band had their first single named “Devera Ngwena Zhimozhi” released in 1979.

The original members who recorded Devera Ngwena Volume 1 were Moyo on lead guitar, the late Robson Banda on bass, Innocent Bitu on rhythm, the late Patrick Kabanda on drums and Johnsai Machinya on vocals.

When Robson Banda left Devera Ngwena, he was replaced by a man called Vhizhayi who also left before the late Jabulani Bitu joined them on rhythm on Volume 2.