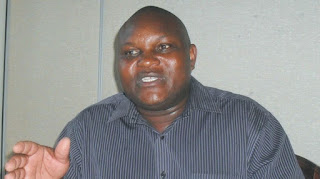 … ‘the party has lost direction’

Pictures of Matutu with President Emmerson Mnangagwa and his two VPs Constantino Chiwenga and kembo Mohadi are doing the rounds on social media.

Matutu confirmed the development in a phone interview, saying he took the bold decision after serious self-introspection.

“My apologies to the MDC grassroots. They stood by me but the problem lies with the leadership which should now celebrate my departure because they did not want me. The party has lost direction,” said Matutu.

He said the MDC leadership was always fighting him and he felt that it was high time he found a new political home where he could be fully-appreciated.

“I worked for the party over the past 20 years but they seemed to take my commitment for granted. They frustrated my every move at each and every turn and I was left with no choice,” said Matutu, who left the then Morgan Tsvangirai-led MDC-T in 2014 during the Tendai Biti led revolt.

He then became one of the most senior Biti-led People’s Democratic Party (PDP) officials in Masvingo province until the party became part of the MDC Alliance in the run-up to the 2018 general elections.

Matutu sounded particularly bitter about the MDC Alliance’s decision to bar him from contesting for the party’s Masvingo provincial chairmanship post during a chaotic elective congress held at Masvingo Sports Club in early 2019. The race was won by James Gumbi who defeated Simon Mupindu.

Matutu was prevented from contesting after the party invoked a clause in its constitution which required only those that had been consistent members for over five years to constest for leadership positions.

Asked how he had abandoned his principles as an avid MDC member who invested so much time and effort in fighting Zanu PF, Matutu said there were no longer any principles to talk about in the MDC.

“What principles? The leadership of MDC now is not principled at all and that is why you see Chamisa and Khupe fighting. If they were principled, the party would not be where it is right now,” said Matutu.

He criticised the Chamisa-led MDC Alliance for its recent decision to remove Gumbi as the party’s Masvingo provincial chair to replace him with ‘old and tired’ Misheck Marava.