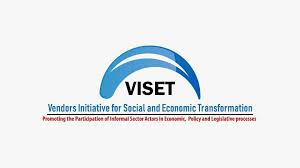 The Vendors Initiative for Social and Economic Transformation (VISET) last week joined the rest of the world in celebrating International Vendors Day, with focus on finding ways to extend social security for people working in the informal economy.

The Viset commemorations were held under the theme, ‘Social Security and the future of the Informal Economy Work’.

This year’s commemorations are being held when the world is struggling to cope with ravaging and desolating effects of Covid-19 pandemic.

In a statement, Viset said greater recognition and assistance should be given to the informal sector in light of the vast contributions that it makes to economies.

The vendors’ organization also states that many socio-political and economic factors have led to the increase of people working in the informal sector of economies.

“At present, it is estimated that across the continent, the informal sector accounts for over 65 percent of employment, with street vending providing much of that number.
It is thus imperative for national and local governments to begin to respect and respond to the needs of the informal sector,” the statement reads.

“Most interventions that were said to cushion people during the lockdowns were poorly thought out and their implementation woefully inadequate characterised by allegations of corruption.

“Part of this maybe ascribed to the fact that there are no proper policies guiding the provision of social safety nets for the informal economy in instances where people are unable to engage in their trade. Most social security bodies are designed for the formal sector, yet evidence at hand shows that more employment is now being found in the informal,” the statement further reads.