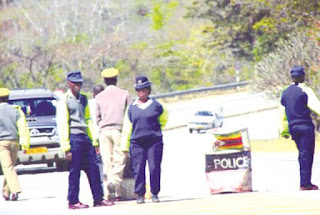 MUTARE - The Central Police station here has been hard hit by bond paper shortages since late year, with the general public being asked by officers to provide their own so that their cases may be processed, TellZim News can report.

This reporter recently observed a complainant being asked by an officer to buy his own bond paper so that the docket could be processed.

The officer was then seen using a blank side of an already used A4 bond paper to print something else.

Police officers who spoke to TellZim News confirmed the shortage of bond paper at the provincial police headquarters.

They painted a glaring picture that the force is underfunded as most officers were asking complainants to buy stationery for their cases to be processed.

“These things should not be said but that’s what is happening on the ground. Sometimes we use our own money to process the paper work because the station does not have any stationery at all. Only the bosses’ offices have some paper and equipment,” said one police officer.

One complainant who spoke to TellZim News said he had to spend his own money after the investigating officer handling the case of his stolen cellphone requested him to do so.

"The investigating officer said that the process will take too long since a court order would be needed to allow NetOne, Econet and Telecel to start tracking my phone. The officer told me that there was a lot of bond paper needed to start the process and the station did not have even one for my case and I had to provide the papers,” said one complainant.

"We have no shortages of bond paper at the central police station. Bond paper is needed at an advanced stage of investigation processes of police cases. When a complainant reports a case, an RRB is used and the later processes will be the baby of ZRP.

"There are departments specifically meant to provide essentials needed for operation of police business. If ever there are any shortages, we find ways to deal with it," said Chananda.

He urged members of the public to report to police authorities whenever requested to provide any form of stationery saying such behavior was uncalled for.

"The public must use proper platforms to lodge complaints rather than approach the media. We do not condone instances whereby the public is requested to provide stationery by police officers.

"Some officers are corrupt and may want to solicit stationery for their own children at home. The public must report such nefarious activities to public relations department, officers in charge and commanding officers," said Chananda.