CHIPINGE— Chibuwe High School head walked from a car accident with minor injuries after the school minibus he was driving while being towed overturned and landed on the side.

The accident happened at around midnight on November 30 while school head Gift Dhliwayo was coming from Checheche where he had attended a school heads meeting in preparation for the 2020 Zimsec exams.

School Development Committee (SDC) chairperson Innocent Mlilo told TellZim News that the school minibus blew its head gasket and Dhliwayo called in for a recovery and one Mtisi, a school teacher, is said to have gone to the rescue using his personal car.

“The head had gone for a meeting at Checheche in preparation for the Zimsec examinations in the face of Covid-19. 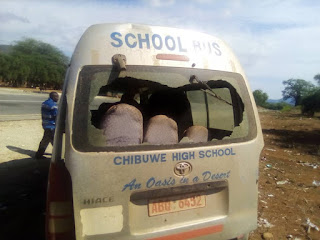 “The meeting ended late and the head, who was carrying day old chicks, decided to return to school. The school mini bus developed faults and it blew its head gasket along the way.

“Another school teacher (Mtisi) went to the rescue and towed the mini bus with his personal car,” said Mlilo.

He said while on the way, Mtisi’s car tried to avoid hitting a herd of cattle which was in the middle of the road and swerved off road dragging the minibus with it.

“While the minibus was being towed, there was a herd of cattle in the middle of the road and Mtisi tried to avoid hitting the cattle and veered off the road.

“Unfortunately the minibus which was being towed overturned and landed on its side. The minibus did not suffer any extensive damages from the accident other than shattered front and rear wind shields as well as side windows.

He said he informed parents about the accident and went to get the police to attend to the scene.