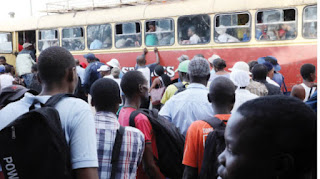 
At a time when the country is recording a surge in Covid-19 positive cases and deaths, public transport operators seem to be complacent and throwing caution to the wind just to make the dollar while putting the lives of commuters at risk.

When the government announced the Covid-19 induced lock down, it came with a lot of measures and restrictions which didn’t spare the transport sector.

To board a ZUPCO kombi or bus one had to wear a mask and sanitize and this was a mandatory measure which the public transport provider was prioritizing.

ZUPCO was even fumigating the buses consistently during the peak days of the first wave of the virus.

Two passengers would share a seat against the usual four in a commuter omnibus and this was a measure which was aimed at reducing conduct amongst passengers.

As time progressed and the country recording fewer cases and high recovery rate, the government was tempted to ease lock down regulations which saw the increased numbers of commuters.

Easing of the lock down overwhelmed ZUPCO and prompted the resurfacing of illegal pirate kombis and taxis commonly known as mushika-shika who are always after profit and maximize every inch of space of their vehicles.

High recovery rates recorded saw the public transport provider and the public forgetting about the dangers of Covid-19, failing to wear face masks and ZUPCO operators now don’t even sanitize their passengers.

A visit by TellZim News crew to some of the pick-up points in Masvingo revealed that conductors and inspectors no longer bother to sanitize people or ask them why they are not wearing masks.

The operators themselves including the drivers are now too lazy to properly wear their masks.

However, with the lock down now eased to the lowest level, it is now a case of road safety and health of the commuters which is now on the line as they are being packed in ZUPCO buses with an excess of over 30 people standing.

When contacted for comment, ZUPCO Masvingo Manager Wiseman Ziweni said they were providing operators with sanitizers and called upon the public to notify authorities when they come across those not administering sanitizers.

“We are giving the operators sanitizers so probably they are relaxing on duty. If you see someone who doesn’t sanitize commuters please inform us and we will address that issue,” said Ziweni.

However, passengers feel they are being put at risk and are demanding that every transport operator joins an association of their own choice.

Passengers Association of Zimbabwe (PAZ) president Tafadzwa Goliati said the ZUPCO transport system was unsustainable and called on the authorities to put in place an open market to ease transport woes.

“ZUPCO is overwhelmed they can’t even provide the buses which are needed to cater for every passenger.

“What we want is an open market where everyone uses a vehicle which they want and that these operators register with an association of their own choice not to be forced into ZUPCO. We have recorded so many cases of people who are being mugged and some are even being abused in these overloaded buses which are not even safe,” said Goliati.

The transport situation for local routes is dire and some may end up walking while some fight and jostle to enter a ZUPCO bus to go home after work.

In Masvingo, residents from Victoria Ranch jostle to get into one bus which was allocated to them as other small kombi operators refuse to ply that route due to the state of dilapidated roads in that area.

An open space opposite to Glow Petroleum service station is a hive of activity after working hours when men and women from Victoria Ranch tussle for transport.

The transport blues always leave women vulnerable since they are overpowered by men and some of them end up walking long distances home.

On these instances, the public forgets about the deadly Covid-19 and it is this kind of setup where people can transmit the virus to each other.

Local cases are being recorded daily and the effects of loosening the lock down are being felt with some already calling for a tighter lock down, ZUPCO to increase their fleet and also for the enforcement of preventive measures in public transport.

The government is sticking to its stance of ZUPCO being the only licensed public transport provider in local routes and that anyone who wants to offer service should register with ZUPCO first.

Safety of passengers is being trivialized and one can imagine what will happen to passengers boarding an overloaded ZUPCO bus with over 100 passengers.

The public transport system needs to be carefully monitored so that the Covid-19 regulations are properly enforced.