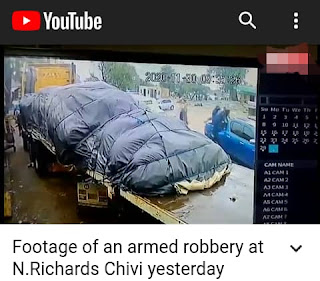 CHIVI - Five armed robbers yesterday, November 30, attacked a Safeguard in-transit-cash vehicle which was about to deliver cash at a Mukuru money transfer agent booth at N.Richards Wholesale and fled with a cash box, TellZim News has learnt.

The Zimbabwe Republic Police (ZRP) posted the matter on their Twitter handle, confirming that the incident happened at around 09:34hrs.

“We have since launched a manhunt for the robbers and we appeal to anybody with information that may lead to the arrest of suspects to come forward,” said national police spokesperson Assistant Commissioner Paul Nyathi.

Details are that the Safeguard crew had come to deliver cash to a Mukuru money transfer booth housed at the shop when gangsters using an unmarked, high-powered sky-blue Toyota GD6 vehicle attacked the security servicemen.

The armed robbers fired three warning shots into the air with a pistol, disarmed the Safeguard crew and took away their 3 x Star pistols and cash box containing an amount of cash which could not be ascertained by the time of writing.

They then sped off from the scene on their Toyota GD6 vehicle.

The unknown armed robbers were later seen at Mhandamabwe Business Centre, driving at high speed towards Zvishavane along the Masvingo-Mbalabala Highway.

Last night, the 24-Hour Medical Centre in Zimre Park and Markeney Transport Services in the industrial area were also reportedly attacked by a large group of armed robbers.