Sludge in the taps... 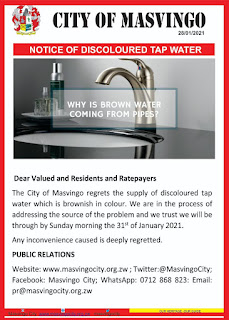 City of Masvingo has responded to reports that one of their employees in the Engineering Department mishandled its tank and pipe cleaning exercise leading to the recent pumping of near sludge water to households, TellZim can report.

In a public notice dated January 28, 2021, the city promised that it was addressing the source of the problem but stopped short of disclosing finer details.

“The City of Masvingo regrets the supply of discoloured tap water which is brownish in colour. We are in the process of addressing the source of the problem and we trust we will be through by Sunday morning the 31st of January 2021.

“Any inconvenience caused is deeply regretted,” the city communicated.

The notice followed an earlier report by TellZim to the effect that the muddy water was a result of a maintenance work debacle at the main reservoirs above Target Kopje when a staff member ‘mistakenly’ released clean water into a tank which was still getting cleaned.

To avoid enormous losses, the water, which had gathered a lot of grit and mud, was pumped into households, leading to the consumption of water of most probably the worst quality ever seen in the history of the city.

“There was a mistake when water was opened into one of the reserve tanks before the cleaning work had been completed. This is the water which was coming out of the taps during the past week,” a source told TellZim.

The initial story can be read on this link.