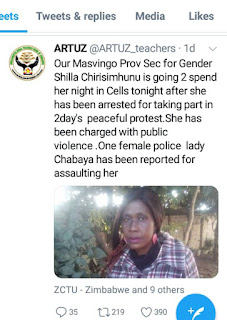 Justice Wamambo ordered Chisirimunhu to pay bail amounting to RTGS$2 000 and to report at Chesvingo Police Station in Masvingo once every last Friday of the month.

He ordered Chisirimunhu to continue residing at her given residential address until the finalisation of her appeal lodged at Masvingo High Court against both conviction and sentence.

On December 18, 2020, Chisirimunhu was sentenced to 16 months in prison by the Masvingo Magistrate Mbonisi Ndlovu who had convicted her on allegations of inciting public violence.

She had been arrested in June 22, 2020, after she allegedly staged a demonstration at the Masvingo district education offices in Mucheke.

There was a public outcry against both conviction and sentence, which the public felt were unjust and disproportionate respectively.

Represented by Martin Mureri of Matutu and Mureri Legal Practitioners who took instructions from the Zimbabwe Lawyers for Human Rights, Chisirimunhu took her matter up to the High Court which finally granted her bail.

In an interview with TellZim, Mureri said he was pleased that his client had finally got bail which she justly deserved.

“We are pleased by the decision of the High Court which accepted the merits of our presentation of this case. We are now working hard to ensure that she gets her freedom back unconditionally,” said Mureri.

The State’s Unice Shoko claimed that Chisirimunhu participated in a gathering with intent to promote public violence, in breach of peace or bigotry as defined in Section 37(i) (a) (i) of the Criminal Law (Codification and Reform) Act Chapter 9:23.

The State further alleged that Chisirimunhu, in the company of 50 other colleagues, some of whom were arrested but later acquitted, went to the education offices chanting songs that denounced the local currency while raising placards.

Chisirimunhu denied the charges, arguing that she was not part of the said group and that she was arrested one kilometre away from the venue of the purported gathering.