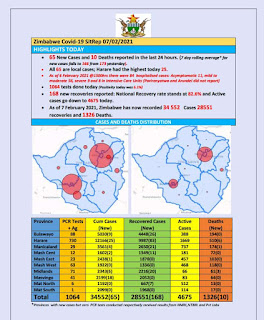 The figures come at a time the curve of the second wave seems to be flattening, but with experts warning that a much stronger third wave of infections could be imminent unless sufficient vaccines are procured in time.

Experts also warn that it is foolhardy for authorities to believe they are winning the war against the virus basing simply on the declining infections and fatalities as testing was still being performed on a limited scale due to lack of resources.

Masvingo province recorded 18 new cases on February 07, the second highest tally in the whole country behind Harare which recorded 25.

The previous day, February 06, Manicaland province had recorded an astronomical 77 new infections which was the country’s highest for the day, followed by Harare and Midlands which recorded 26 cases each.

A total of four people died of Covid-19 in Manicaland’s on February 06, and the number declined to one death yesterday when only 10 fatalities were recorded countrywide, down from 13 the previous day.

In Masvingo no deaths were recorded for two consecutive days, February 06 – 07, with the cumulative death total holding firm at 64 in a province with 83 active cases and 2052 recoveries.

Harare still maintains its lead as the epicenter of the virus at 510 total deaths, 1 669 active cases and 12 166 cumulative Covid-19 cases.

Government says vaccines that are being procured from Western countries, as well as those donated by China, will be available free-of-charge to all people who want them.

Meanwhile, South Africa has suspended a rollout of vaccines developed by Oxford in partnership with British-Swedish biopharmaceutical giant AstraZeneca.

This followed trials carried out at the University of the Witwatersrand which showed that the vaccines’ effectiveness to a coronavirus variant called B.1.351 was ‘disappointing’.

The variant, also known as 501.V2, was first discovered in that country in January but has been detected elsewhere across the globe.

There are worries that the variant, which is now responsible for 90 percent of new infections in South Africa, could be present in Zimbabwe due to geographical proximity leading to freer movement of people between the two countries notwithstanding the lockdowns and the limited border closures.