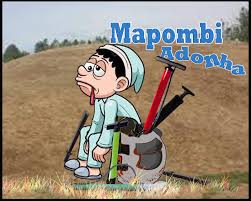 Dear readers I hope I find you all well and in good health. Mapombi is happy to be with you again and I want to assure the nation that the Sinopharm Covid-19 vaccine donated form China is safe. It is very safe that our beloved President ED Mnangagwa would not dare take it until the majority of Zimbabweans get jabbed first. Munozoda leader akadii kkk. A leader who sacrifices himself and puts his name to the end of the list all because the vaccine haikwani. I salute you Cde President keep up the good work. I hope Zimbabweans will vote for this man again come 2023. Machinja muriko here uko kkkk. Nero chakabaiwa here vaccine iyi.

I have a word of advice to my avid readers who sometimes feel disappointed when Mapombi strikes a neutral key in her writing. That problem mainly resides in the MDC supporters. Let me tell you something imi machinja. Mapombi does not support any political party. Mapombi is very patriotic and supports the Zimbabwean constitution. Anyone who thinks of urinating on our sacred document will automatically put themselves on a collision course with me. Handinei naChamisa or ED. Zanu PF or MDC Alliance are all the same before my eyes. I am more concerned with issues rather than personalities. Zvenyu zvekuti Chamisa Chete Chete that is madness. Why Chamisa Chete Chete? Ko vana Biti and Sikhala vodii kkkk. I can sense some people are getting angry but ungandidii. Mapombi anobata bata maparts kuti nyika inake.

The problem we have as a country is that we are extreme in all we do. You find that if someone supports Zanu PF, they do so to extremes that they stop using their brains. The same applies kuMDC. These two spend the majority of their time fighting each other and at the end a lot of issues are ignored. It is very rare to see neutral and sober people like Mapombi. The majority cheer madness on just because it has been done by Mnangagwa or Chamisa. The country will start moving forward once our people start using their brains to address and tackle issues and not use blind loyalty. If Zanu PF and ED does something good, why can’t Chamisa and his people praise the good deeds and the same cycle must happen when Chamisa does something good. Mapombi thinks that ED and his government have done very well in combating the Covid-19 pandemic under the circumstances. We have managed to contain the virus though our people suffered a lot. The bigger picture was to save lives even for those in opposition. Despite these efforts, people in MDC vanoshora big time kkkk. Hanzi ED is clueless on how to deal with Covid-19. I mean what do you want imi vanhu. The vaccine is here but hamudi kubaiwa saka munodei chaiko.

I am happy that this guy Hopewell Chimukonyo has seen the light. He was one of the biggest critics of the vaccination programme saying it was a ploy by Zanu PF and the Chinese to kill Zimbabweans but the man has since toned down and seen the light. I do not know what could have informed the change of heart and mind but what matters is that he has since taken his jab and believes that vaccination is the only way to save lives. Besides Zanu PF musaidherera vakomana. You cannot fight Zanu PF out rightly because you will need them at some point. Zanu PF is not just a party but it is a system. Kwese kwawaenda unongowana Zanu iriko which is why a lot of people are fighting to join the system because removing it has failed one too many times. Chamisa is trying yes but he has to up the game. Zanu PF does not live by anyone’s rules but they make their own and make you live by them. Cde Chebundo and Cde Timveous muriko here uko kkkk. Agenda 2021 makainzwa here varume. I think Nero made a lot of sense but there is one area which I differ with the young man.

I agree with Nero that we have suffered a lot as a people and something has to be done. I agree with Nero that the problems we face a country are because of maladministration. Where I fail to agree with Nero is when he talks of Zanu PF trying to create a one party state by destroying MDC Alliance. Ipapo hoo Nero, Mapombi azviramba. Remember I once told you that sometimes you overrate the powers of Zanu PF. I once said here that Zanu PF is only powerful as you imagine it to be. You are admitting to the public that Zanu PF has the power to destroy you and form their own opposition. That is real bad chikomana Nero. I don’t know who advised you to say that because if you paint a picture of an all-powerful Zanu PF then we may be compelled to believe it. You are unconsciously telling us that Zanu PF is very powerful and cannot be defeated hence we will say why bother torega hedu kuvhota isu vana Mapombi pombildo pombela.

While I agree with Chamisa that electoral reforms are necessary, it just can’t with Zanu PF. Ndiyo iya yataiita kumaths kuti it can’t kkkk. We have been singing about these reforms kubva Save vachipo but hapana chakabuda imiwoye. Zanu PF will never reform itself out of power and the sooner we realize that the better. It is time for other strategies of winning the elections without the electoral reforms in place. If you doubt that elections will never be won without reforms in place then we are playing hedu. Plus Chamisa has a problem of treating Zanu PF with kid gloves, kutamba chiramu neZanu PF. Chamisa tried to put the fight to the people but I must tell you Nero that isu vana Mapombi we need a leader. We will never stand up pasina leader. Lead us Nero lead us. Izvi zveugwara zvako zvekuda kutitungamidza mberi ndezvekupenga kkkk iwe enda isu tinotevera. You talk of confronting Zanu PF through peaceful means, really. How do you do that?

I said earlier that Zanu PF does not play by your rules, they set the rules and you play by them. Zanu PF and peace are two parallels. My brother Nero I think I can school you a thing or two about Zanu PF because it seems you don’t quite understand yet who you are dealing with. This language of peace does not move Zanu PF an inch. As long as peaceful confrontation muchiitira mudzimba dzenyu Zanu PF haina kana basa nemi. The moment you get into the streets I promise you munorohwa nezveusiku kkkkk. Since when has a confrontation been peaceful? I have said enough regai zvangu ndinokanga maputi angu for lunch but before I go, I just want to tell vakuru veguta reMasvingo that you are taking residents for granted. What justification do you have to increase rates by 500 percent? The bottom line is that there is no justification whatsoever and even if you try and put lipstick on a frog it remains a frog. Hameno kana tiri tese apa dear readers. The fish rots from the head and they told us Gozo was the problem but he is gone and what has changed? Mboko imboko.