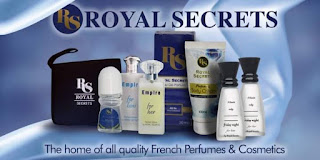 MASVINGO- Royal Secrets, a network marketing company that was launched in Masvingo in 2018, is creating an opportunity for unemployed youths to make a living through marketing and selling of deodorants among other goods.

It also pays a fee for every new agent recruited giving those with marketing skills a wider chance of earning money.

If an agent recruits five people in the scheme he or she gets a percentage amount from every single item sold by his/her recruits on monthly basis.

Speaking to TellZim News, Masvingo branch manager Tavonga Mandinyenya said there were a number of advantages in using Royal Secrets as people can get easy money through their marketing prowess.

“Royal Secrets is creating a big platform for those who are willing to earn a living through selling and getting a large commission which a few companies can offer.

“If a spray cost seven dollars, one remits four dollars to the company and keeps three dollars per spray sold; the same applies with Roll On and other products.

“A Roll On is sold at four dollars and one remits two dollars and fifty cents to the company and keep a dollar fifty as commission,” said Mandinyenya.

One agent Viola Rukatya praised Royal Secrets saying she acquired most of her home assets from the commission she was getting from Royal Secrets.

“I’m earning a lot of profits from Royal Secrets and I encourage others out there to come and benefit from the scheme to fulfill their dreams,” said Rukatya.

When joining Royal Secrets one is required to bring a passport size photo, proof of residence, copy of ID and US$5 joining fee.

Royal Secrets originated in France and was introduced in Zimbabwe by Tatenda Madzivo and his wife Talent Madzivo in 2014.

The scheme holds annual competition where it rewards the best sellers with gifts like cars, televisions among other things.