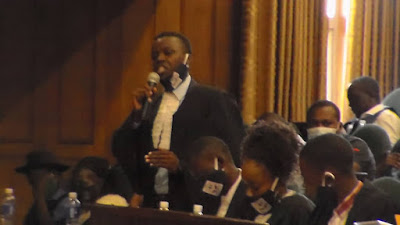 Four universities participated in a moot competition which was organised by the Institute for Community Development in Zimbabwe (ICOD Zim) and the Great Zimbabwe University (GZU) at the Herbert Chitepo Law School to raise awareness on the rights of People With Disabilities (PWDs) especially women and girls.

The competitions ended on a high note with the hosts coming out first, followed by MSU at second position, UZ at third and ZEGU last.

ICOD Zim director Talent Maposa said the moot court competition was a platform to promote the uptake and access of Sexual Reproductive Health Right (SRHR) knowledge since women with disabilities suffer from sexual violence and abuses.

She said most of the victims’ cases go unreported and they do not receive justice because law officers often stigmatize and stereotype them.

"We realized that women with disabilities still face numerous barriers such as communication barriers. Moreover, most if not all health facilities in Zimbabwe do not have Sign Language interpreters and materials written in Braille.

“Some health facilities have stairs but do not have elevators and ramps that are friendly to PWDs who want to access such health services. This moot competition is therefore a platform for advocacy," said Maphosa.

She said ICOD Zim remained committed to lobbying, advocating and championing the rights and fair opportunities for PWDs and WWDs.

Herbert Chitepo Law School dean, Victor Nkiwane said he was excited by a chance for his institution to compete in such a noble initiative.

"I am excited to be part of the success of the moot court competition and I am impressed by efforts being made to ensure that issues of PWDs are mainstreamed by raising awareness through platforms as this,” said Nkiwane.