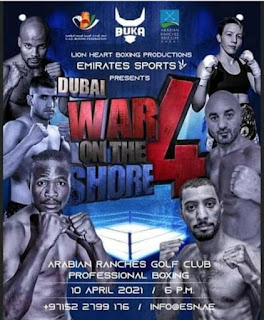 …first match out of Africa a game changer welterweight champion

Masvingo based World Boxing Organization (WBO) Africa Welterweight champion, Brendon Denes has expressed optimism ahead of his fight in the United Arab Emirates (UAE) which is slated for this Saturday, April 10, 2021.

The 26-year-old fighter will face Ahmed Samir Darwan of Afghanistan at the Arabian Ranches Golf Club in Dubai.

Boika, as Denes is affectionately known in the boxing fraternity, will leave the country today (April 07) in the company of his coach Ali ‘Otto’ Phiri.

Speaking to TellZim News before his departure, Denes said the opportunity was a rare one and that he would do his best to win.

“This is one of my best opportunities and I am ready for the fight. I am emotionally and physically fit. I am going to take the guy heads on. I am promising good results because this is a fight of a bigger magnitude,” said Denes.

Boika said his camp had done all the homework and intensive preparations and that he was looking forward to raise the country’s flag high.

“It is actually an honour for me to go out there and represent my country because I am proudly Zimbabwean. I want to make my fans and every Zimbabwean happy. We have been in camp and I am going out there in full force because I and my coach have done all the necessary preparations,” said Denes.

The Charles Manyuchi Boxing Academy product will feature in a boxing extravaganza dubbed ‘War on the Shore 4’ which will see six boxers from different countries exchange blows in three matches.

The fight which was secured by the Gilbert Munetsi-led Box Africa will be Boika’s first fight in the UAE and outside Africa as he continues to rise in the boxing fraternity.

Boika who was supposed to face off Hassan Mwakinyo of Tanzania in March but the bout got affected by the death of President John Magufuli. The fight was then postponed to May since Tanzania is observing Ramadan for the whole of April.

If he wins in Dubai the World Boxing Federation (WBF) Intercontinental Champion will get a chance to participate at a boxing galore in America which is slated for July this year.