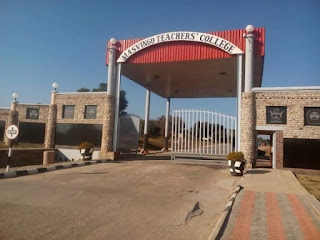 For the past 5 days, Masvingo Teachers’ College has been operating without running tap water as a result of a burst council water pipe in Morningside which supplies water to the institution.

Masvingo Teachers’ College Principal Benson Mtambudzi confirmed that the institution has been experiencing some water supply challenges and hasn’t been receiving water since last week.

“Yes, the institution has been operating without running tap water but council has promised to fix the problem which resulted from a burst pipe,” said Mtambudzi.

The water woes started last week on Thursday, March 25, when the whole city was left desperate for tap water following a major breakdown at the Bushmead water works treatment plant.

Mtambudzi said that they had registered their complaint with the local authority which promised them that they should expect running tap water yesterday (March 30) but has failed to fulfill their promise.

“Council promised us that they would fix the problem and that we should expect running tap water yesterday but unfortunately didn’t manage to deliver to their promise,” said Mtambudzi.

Currently, Masvingo Teachers’ College is depending on borehole water but one of their borehole reservoir has since broken down leaving their water supply system strained.

Effort to get a comment from acting Town Clerk, Eng Edward Mukaratirwa were fruitless as he said he was out of the office but referred all questions to the Public Relations officer, Ashley Jinjika.

“I’m aware of the situation but I cannot comment because I’m out of office but you can contact Jinjika,” said Mukaratirwa.

Contacted for comment, Jinjika said she couldn’t give an official comment claiming that she was not aware of the situation and would only comment after getting the report.