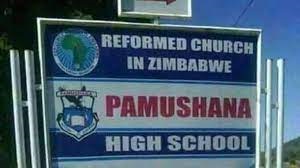 More striking perhaps, is the fact that female candidates performed far much better than their male counterparts.

Pamushana High School head Agrippa Moyo said he was delighted by the results which he attributed to a culture of tireless effort.

He said parents were supportive of the school in a number of ways and that support had resulted in good performance by pupils and their teachers.

“We are maintaining the standards for which we have been known as a school of repute. We want to continue shining in academics and sport as we have been doing for long. The impressive results are also a result of the support by parents who have never let us down in all our efforts to be on top,” said Moyo

The English language subject recorded the highest number of As which totalled 126; 76 of them being by girls.

Geography and Shona recoded 96As, Statistics 80As, History 79As, Heritage Studies 62As, and Accounting 61 As.

In Mathematics 46As were recorded while Business Enterprise had 40, Computers recored 36, Chemistry 33 and Commerce 24.

Wood Technology and Literature in English recorded 8As and six As respectively.