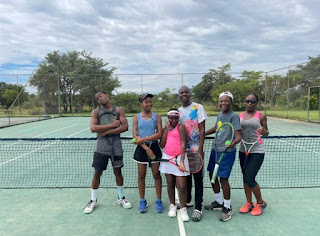 …another tennis galore slated for August

Masvingo tennis players who were in February and March supposed to play at a regional tournament held in South Africa failed to travel to the tourneys after failing to secure funding, TellZim News can report.

Masvingo Tennis Board Chairperson, Munyaradzi Thomu told TellZim News that they missed Under18 International Tennis Federation (ITF) tournaments that were played in South Africa because of lack of financial resources.

“Unfortunately our Under 18 players from Masvingo who were supposed to represent Zimbabwe ended up withdrawing because of lack of financial resources.

Meanwhile, players have resumed training and games ahead of a tennis galore which is slated for August where the province’s finest tennis aces are expected to feature.

Practice and friendly matches are being played as players gear up for what is expected to be an intriguing encounter, since they have been on hold from last year March.

Thomu said that they were gearing up for tourneys which will be hosted at Masvingo Sports Club.

“Local players started playing games towards the end of March and we are going to host Masvingo Junior Closed tournament from 14th-16th May at Masvingo Sports Club.

He said they were planning to have junior schools league starting from the second term and they will be taking young players.

“We are planning to have schools junior league starting second term and we will be taking players from 4 years and upwards,” said Thomu.

Tennis is one of the few sports codes which received a greenlight from the Sports and Recreation Commission (SRC) to resume action.

In a communique to its affiliates, Tennis Zimbabwe has directed all local leagues and teams to appoint an enforcement officer who will ensure adherence to Covid-19 guidelines.

“All tennis facilities will appoint enforcement officers who will ensure adherence to the guidelines and these requirements and guidelines will cover players who are registered with Tennis Zimbabwe and have a clearance letter,” reads the communique.

“Tennis is a non-contact sport so we were fortunate to be given the go ahead by SRC to resume practice. We have been also limiting our group sessions to a maximum of four players per court, which give them a healthy 3-6 metres apart each time.

“There are no handshakes at any given time, we always encourage players to use rackets as their hand to avoid contact,” said   Chinyenyani.