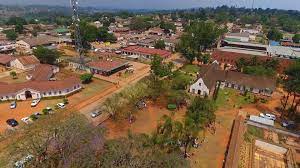 CHIPINGE – Football lovers and night travelers in Chipinge will have something to smile for as Chipinge town council is planning to renovate and refurbish the monumental Gaza stadium and restore the street lighting.

This was revealed during an engagement meeting organized by TellZim News between Chipinge councilors and residents.

Ward six councilor Lovemore Mutimwiyi told the resident that the council was planning to refurbish the stadium and resources were being put together.

"Plans to renovate the stadium were part of our discussion in the last full council meeting to which everything will be changed from the fence to upgrading the terraces and renovation of the toilets. Everything has been budgeted for and I want to assure residents that very soon they will progress at the stadium,” said Mutimwiyi.

Gaza stadium is famous for hosting Chipinge’s most activities that draw public gatherings like rallies, football matches and public holiday’s celebrations among others.

The fence and the grandstand of the stadium had been damaged and the toilets are in a terrible state but the councilor assured residents that the renovations would bring sanity to the once glorious stadium.

The councilors also told the residents that street robberies would soon be a thing of the past as council plans to refurbish street lights.

Residents had asked councilors what the council was doing to minimize cases of theft and robberies in the streets at night especially in areas where there are no street lights.

"Street lighting is very important; we have had quite a number of theft and robbery cases at night and these thugs take advantage of the dark. We discussed the matter in our full council meeting and it was resolved that street lights be restored as soon as possible. I think you have noticed that we have erected a functional and environmental friendly solar street lights from town up to Chinheya but most of them were stolen,” said Nhengu.

"We have since decided to use a new type of street lights which are LED Outdoor Flood Lights which will be installed on a booster like platform with one light covering 40 to 50 meter radius. This means we need a few light to cover the whole ward," said Nhengu.

Residents also complained about public toilets which they said were in a desolate state resulting in travelers and other dwellers opting to use bushes and roadsides to relieve themselves especially at night.

"This is a very genuine complain by residents and the issue of public toilets in wards seems to have been forgotten and need urgent attendance. I will definitely present the issue to the responsible authority in council," Said Mutimwiyi.