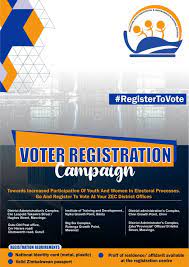 COTRAD programmes manager Zivanai Muzorodzi said that if too many young people neglect their right to vote, they could become a demoted group.

“Many youths want to register but they are facing transport challenges to get to the main registration centres,” said Muzorodzi.

He also mentioned that they have organized first time voter tournaments in Masvingo, Zaka and Chiredzi as their main aim is to notify youths that ZEC offices are open for registration and community markets which is done every month in different wards.

The campaign is mainly targeting young men and women, especially those who are reaching voting age and older people who have not voted previously despite being legible to do so.

The level of participation of youths in electoral processes is worrying despite the fact that they represent over 60% of the national population.

In Masvingo only six people registered to vote in May 2021 therefore COTRAD has begun the campaign to educate young people about their roles as citizens, their rights and responsibilities, the importance of voting, and how best to make choices in voting.