Diaspora ready to fight for right to vote 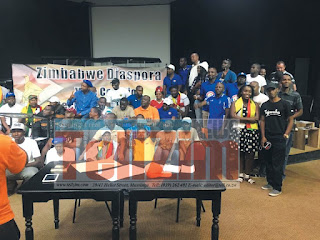 Part of the crowd  that attended the DVC meeting in Johannesburg

People living outside the country say they have been emboldened by the government's hardline stance against their right to vote and have now decided to fight for that right through litigation and political processes.
Government is often criticised for conveniently respecting the diaspora in as far as their remittances are concerned only to treat them with disdain when they ask for their political rights.
Many pressure groups, faith-based organisations and external wings of opposition parties gathered in Parktown, Johannesburg on November 12, 2016 and signed a Memorandum of Understanding to commence a spirited fight to win the diaspora vote.
The gathering fell under the Diaspora Vote Coalition (DVC) and was facilitated by Bishop Paul Verryn, the renowned philanthropic clergyman of the Methodist Church.
In a press statement, the DVC, agreed "to fight with one voice and in one corner" so as to attain the right to vote for all people of Zimbabwe living outside the country.
The DVC include such groups as the Zimbabwe Exiles Forum (ZEF), #This Flag, Tajamhuka, Global Zimbabwe, and external wings of Zapu, MDC-T, MDC-N and the Liberal Democrats of Zimbabwe (LDZ).
"The signing ceremony marks a clear statement of intent by Zimbabweans resident in the diaspora that they are ready to fight for this inalienable right, until it is realized," reads the statement.
As part of its roadmap, the DVC resolved to pursue a number of campaigns, including approaching the Constitutional Court of Zimbabwe for an order declaring provisions of the Electoral Act, that restrict  the right to cast postal votes to government employees and their spouses only , as unconstitutional.
The coalition will concurrently seek to interdict the State-aligned Zimbabwe Electoral Commission (ZEC) from commencing any voter registrations activities, until the matter of the diaspora vote has been heard.
This will be accompanied by vigorous lobbying of the United Nations (UN), European Union (EU), African Union (AU), Sadc and other relevant structures to support the cause.
ZEF chairperson and human rights campaigner, Advocate Gabriel Shumba said the diaspora vote is a non-negotiable right.
"The Constitution is unequivocally clear on the rights of all citizens to vote…. Arguments advanced so far to deny us this fundamental right are unconvincing. The alignment of the electoral laws to the new Constitution can be done in a jiffy," said Adv Shumba.
Recently, ZEC head, Rita Makarau cited resource constraints as the reason why the diaspora cannot register to vote and cast their ballots in their countries of residence.
She said those who wanted to vote in 2018 should come back home and register to vote then come back again to vote in their wards, an expense that most diasporans cannot afford.news
Share !