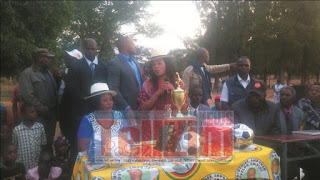 ZAKA - Ndanga Rasters Football Club last week lifted the Chief Ndanga trophy after dismissing Chimedza Football Club in the finals after a 4-3 win in the penalty shootout following a goalless draw at a match played at Chimedza School.
The tournament was sponsored by Doctor Phionah Riekert and was launched a few weeks ago in Chief Nyakunhuwa area and is set to rotate to all Zaka's four Chiefs and will be held annually.
Chief Ndanga's trophy had 12 teams which participated and Ndanga Rasters were unbeatable from the right from the quarter finals up until the finals.
The Rasters defeated Danda FC with a goal to nil and Chimedza defeated Redza with the same margin in the quarter finals.
The Rasters secured a ticket to the finals after dismissing Rusakazara 4 -2 in a penalty shootout while Chimedza secured theirs after beating Rwonzi in penalties after goalless draws in both games.
The two teams walked away with a soccer kit and a ball each as their prices and the players were promised cash prize and but the actual amount was not disclosed.
Speaking after the Tournament, Dr Riekert said the tournament was meant to help the unemployed youth to develop their talents through sport and was also a payback to her home area and will bring in more programs to cater for other sports persons.
"Next time I will bring more games to cater for women as well so that everyone benefit," she said.
Dr Riekert is a business entrepreneur and a doctorate graduate based in South Africa.
The next tournament is set to be held in Chief Nhema area in two weeks' time.news
Share !