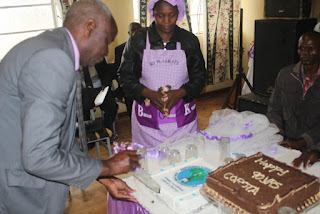 Rev Josphat Zambuko cuts the cake during the celebrations

MASVINGO – The Margaret Hugo schools for the blind, commonly known as Copota, celebrated their 90th birthday in Zimuto on Saturday last week.
The event was preceded by the unveiling of Helen Hugo's tombstone at Morgenster Mission earlier in the day.
Hugo, who was born in 1909 and died in 2002, played an instrumental role in the establishment and later growth of the schools together with her parents Margaret Hugo and Reverend Hendrick Hugo.
The history of Copota dates back to 1915 when it was formed by the Dutch missionaries at Chibi Mission and was formally registered as a school in 1927 with eight learners and it relocated to its present site in 1939 under the tutorage of Helen.
The institutions now run under the Reformed Church in Zimbabwe (RCZ), championing the educational rights of the visually impaired who are taught such skills as chalk-making, cane-weaving, agriculture, music and home economics.
In the speech read on his behalf by Rev Josphat Zambuko, RCZ moderator Rev Rangarirai Rutoro praised the work being done by the schools.
"Copota grew to become a large mission station with grade seven, form one to four in 1976 and advanced level in 2008. At present, the enrollment is above 350 learners.
"Copota has managed to produce several skilled workers, college and university graduates and it saw the development of the Maranatha Choir which travelled throughout the country and abroad," Rev Rutoro said.
The schools, however, celebrated their birthday amid a myriad of challenges ranging from electricity arrears to a tight budget and lack of specialised learning equipment.
The Ministry of Primary and Secondary Education through the Provincial Education Director (PED)'s office, said it was concerned with the lack of activity in the schools' workshops.
Cosmas Tapiwanashe Musasa, who spoke on behalf of PED Zedius Chitiga, pledged continued support for the schools.
"We are worried about the under performance of the workshops and we encourage authorities to engage in research about dustless chalks and other productive projects so as to revive the workshops. We will continue to support Copota school for the Blind," Musasa said.
Hospitality services group, Holiday Inn donated duvets, forks, blankets, knives, sheets and others goods to the tune of US$5 000.local
Share !