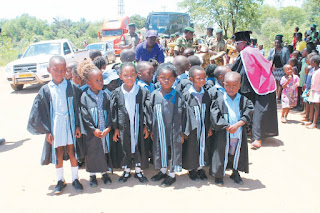 Part of the proceedings at the Mamak Pre-School graduation ceremony

CHIREDZI – There was excitement and spectacle in town recently when Mamak Pre-School hired the Zimbabwe National Army (ZNA) 4 Brigade brass band to perform at the elementary school's fifth graduation ceremony.
The well-drilled, Masvingo-based military band attracted a large crowd of excited members of the public who came either to witness the graduation of their children or to enjoy the melodious beats of the band.
A spectacular 5km march along West Road was held with people eager to walk alongside members of the military, a fashionable treat considering recent development in the country.
ZNA 4 Brigade music director of music Simon Munsaka took the lead in demonstrating the exceptional entertainment capabilities of the band.
People present praised Mamak Pre-School for continuing to make a big difference in the primary education sector of Chiredzi by producing highly capable pupils who fit into any primary school.
"Mamak remains second to none other pre-school in Chiredzi. The children who come out of this pre-school are the best," said Shingai Primary School head Isaac Tamuka.
Another resident Simon Gutsa was pleased with the entertainment galore, saying the pre-school should continue its impressive work which he said had made it the elementary school of choice.
"I am impressed by both the presence of the band and the conduct of the children. The children are well-taught as evidenced by their excellent poetry skills as well as their mastery of other performances they staged in front of the people," said Gutsa.education
Share !