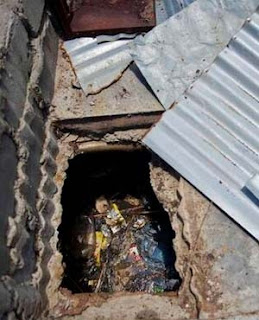 People in Ngundu were left shocked after a man revealed to the police that he had killed his eight-year-old son and buried him in a toilet pit, police in Masvingo have confirmed.
Sometime in April last year, Norman Mahachi (46) of village T1 Rugura, allegedly killed his son Norman Anyway Mahachi for failing to come back home on time when he visited his sister Mercy Mahachi's place for the day.
Norman and his wife Ellen Nyavanhu, who is the deceased boy's step mother, told the police that after dusk, with the young boy still at his sister's place, they went to fetch him.
On their way home, Norman started beating Anyway with a Mupani stick all over his body, inflicting bad injuries on him.
The following morning, Nyavanhu left the house for Nyajena and asked Mercy to take care of Anyway for the day, thinking the boy was asleep.
When Norman woke up, he found the boy dead and he decided to bury him in a three-metre-deep toilet pit some few metres away from the homestead.
When Mercy came looking for Anyway, Norman lied to her saying the boy had visited their (Mercy and Anyway's) biological mother Lorraine Mupause who stays in Chivhu.
Sometime in August, Mercy called Mupause asking if Anyway was fine and was told that he had never visited her.
Sometime in December 2017, Mupause went to Ngundu to find out what had happened to her son but her ex-husband told her many stories.
Mupause reported the case to the village head Amson Mabhusa who advised her to report the case to the police, which she did on January 23, leading to the suspect's arrest.
Masvingo provincial police spokesperson, Inspector Charity Mazula advised parents to exercise restraint when disciplining their children, and not to try to run away from justice.local
Share !