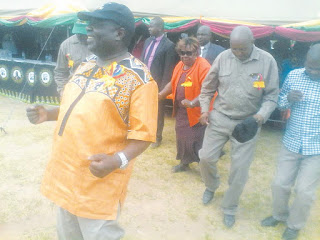 BIKITA - ZANU PF National Political Commissar Rtd Lt Gen Engelbert Rugeje recently took a dig on Masvingo Members of Parliament (MPs) saying most of them are uneducated opportunists who make it difficult for the appointing authority to choose ministers from the province.
Addressing party supporters during the celebrations for his appointment a fortnight ago at Nyika growth point, Rugeje said the people of Masvingo are quick to apportion the blame on others when they fail to get ministerial positions.
He said the problem is that the people who get into power do not possess the necessary qualifications to hold ministerial posts.
"We have cried for a long time asking why people from Masvingo are not given ministerial posts. We should know that being a minister is not a walk in the park and it is different from sharing opaque beer.
"It is a task that requires mental capabilities and strong academic backgrounds," said Rtd Lt Gen Rugeje.
He also took the moment to attack axed Bikita South MP Jeppy Jaboon and former provincial youth league chairperson Nobert Ndaarombe.
He said the two thought were invincible and at one time Jaboon told Rugeje to move out of the barracks and remove his uniform if he wanted to join politics.
"We will ensure that the youth know the ideology of the party. Can you imagine that Jaboon told me to remove my uniform and join politics and now I have removed the uniform and where is he?" asked Rtd Lt Gen Rugeje rhetorically.
He also took the chance to educate the people on the position of the party regarding party regalia as he warned people not to wear T shirts bearing Mugabe's image when coming to Zanu PF meetings.top news
Share !