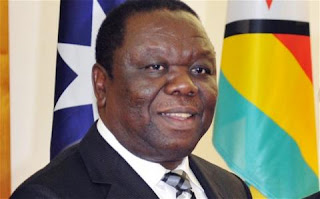 
…Masvingo organises transport for mourners
Itai Muzondo / Moses Ziyambi
GWERU – Distraught MDC-T members and supporters yesterday marched and held a prayer meeting at the opposition party's house in Athlone to mourn the death of Morgan Tsvangirai.
Addressing the grief-stricken gathering, MDC-T deputy provincial chairperson, Cleopas Shiri said it was hard to believe Tsvangirai was gone for good.
"We have since notified the police that until our leader is buried, we will respect him through vigils and solidarity marches.
Shiri encouraged all party cadres to continue the struggle as Tsvangirai would have loved them to do.
"The struggle must not stop because our leader is gone. He has just physically departed but is still with us spiritually. Let his spirit unite us like never before.
"If Tsvangirai's death is the project of an enemy, then that enemy has already lost the battle because our party has now been reinvigorated by the spirit of 1999," Shiri said.
MDC-T Masvingo provincial chairperson James Gumbi said all party districts were directed to organise transport to ferry mourners who to the funeral.
"This is our opportunity to salute our departed leader for the last time. We want Masvingo province to give him the honour that befits him by working together to make sure that those who want to go to the funeral will be able to do so," said Gumbi.
Party national spokesperson, Obert Gutu told TellZim News the right people were dispatched to South Africa to fetch Tsvangirai's body.
"We expect the body to arrive in Harare tonight or tomorrow morning but burial will take place at his home village in Buhera on a date to be announced," said Gutu.
Although government has directed that Tsvangirai be given a State-assisted funeral, it has – against the wishes of many – dithered on declaring him a National Hero.
The veteran opposition leader died on Wednesday evening after over a year's battle against cancer of the colon while undergoing treatment in South Africa.top news
Share !