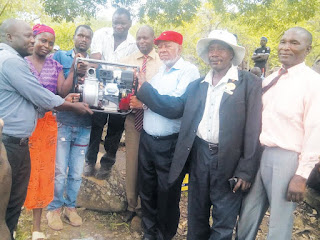 Representatives of Chizumba Primary, Omar, Chief Mawarire (with white hat) and other people pose with the donated pump
Cephas Shava

MWENEZI - Barely 10 months after assuming office and just a little over six months before another election, Mwenezi East Member of Parliament (MP) Joosbi Omar has started a programme of identifying all areas of need and fulfilling election promises.
Last weekend, the MP organised many constituency development committee meetings in various wards to preach development and mobilise support for President Emmerson Mnangagwa ahead of the elections.
In Ward 4, Omar donated a water pump to Chizumba Primary School, uniforms to village health workers and stationery that included 1 900 exercise books to nine primary schools.
Some 20 bags of cement were donated towards the construction of enclosures for villagers of Ward 6 who are engaging in cattle fattening.
At one of the meetings, Omar said a total of 200 benches had been made to improve sitting
"The time for shifting blame is over, and the time for action is now. We must unite and work tirelessly to ensure meaningful development in accordance with the vision of President Mnangagwa; the time for empty slogans is over," said Omar.
He also told the gathering, which included Chief Mawarire, that new projects to empower the less privileged people of Mwenezi East were being explored.
"In the coming weeks, we will kick start projects that will enable villagers to be their own masters. We also want to ensure that our dams are fully utilised for income-generating projects. Let's all work for unity and development and ensure that President Mnangangwa wins the upcoming elections," said Omar.
At Bongo in Chingwizi, Omar made a commitment to bring building materials for the construction of a classroom block at Nyuni Primary School.
He listened to accounts of local problems that included water shortages and the delay in fully compensating the people who were displaced by the construction of Tokwe Mukosi Dam.
Omar, who has built a state-of-the-art constituency development office at Rutenga for the reception of developmental needs, said he was committed to bringing investment to the area.local
Share !