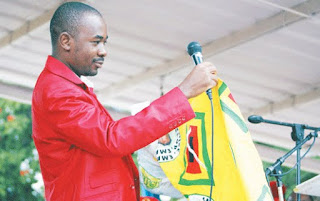 Claims by one of the MDC-T vice presidents, Nelson Chamisa that the MDC Alliance is guaranteed a $15 billion shot-in-the-arm from the US government if the opposition wins the upcoming elections has opened up questions over the young politician's ability to lead the country or his party after the American embassy in Harare distanced and poured cold water on the statement.
Political analysts described Chamisa as politically immature saying he really needs to learn a lot of things if he is to become MDC president one day.
Analyst and Great Zimbabwe University (GZU) lecturer Jowere Mukusha said Chamisa's statements were just a political gimmick aimed at wooing supporters and that the young politician exposed himself that he is still into student activism politics where lies take centre stage.
"The amount that Chamisa claimed was promised is not a joke and my assessment is that he was just trying to charm his supporters even though he knew there was no such a thing in actual fact.
"The Americans are not stupid and for someone to just pay them a visit and be promised $15 billion would not procedural," said Mukusha.
Addressing an MDC Alliance rally in Mutare last weekend, Chamisa said when he and his colleagues visited the US in December last year, President Donald Trump promised to give them that amount to rebuild the country once they form the new government.
"When we met with President Trump in America alongside Biti, he asked us how much we needed to move the country forward and we told him that we needed $15 billion.
"He assured us that the money will be disbursed soon after winning the elections. He told us that he had faith in us because we don't behave like Zanu PF crooks," said Chamisa at a rally in Mutare.
However, US Embassy spokesperson David McGuire shot down the claims in an interview with State media later on, saying his government does not support political parties.
"We do not support individuals or political parties. We do not take a position on who is going to be a political leader of a country. The outcome of an election is up to the people of that country to decide. We do not make such promises to individuals or political parties," McGuire was quoted as saying.
When TellZim News contacted Chamisa for comment on the latest developments, he claimed his message was distorted, but reiterated that money would indeed come.
He said the international community had shown confidence in the MDC Alliance under the leadership of Morgan Tsvangirai.
"The international community is confident in the MDC Alliance and they have promised to give our government the money we need to rebuild the country which has been sucked dry by the Zanu PF regime.
"Yes, the American embassy has the right to deny the distortions being peddled in some sections of the media because I was misconstrued though I had made myself clear. The money we are going to receive is not for a political party but is for the MDC Alliance government.
"It is the government not a political party that will receive the $15 billion and I tell you the money is coming because of the confidence that the Americans and the rest of the international community have in the MDC Alliance," said Chamisa.
However, Dr Takavafira Zhou, a political analyst, defended the claims as true but added that the young politician made a mistake by prematurely letting the cat out of the bag.
"My sober analysis is that Chamisa was not lying about the promised $15 billion but the pledge was supposed to remain confidential.
"Chamisa still has a lot to learn on diplomatic discussions, privacy and confidentiality. He is still an unpolished diamond but if he rubs himself with think tanks and gets proper advice, he will be a well-polished diamond.
"It is only logical for the American government to save face and deny ever making such a promise because they thought the pledge was going to stay a closely guarded secret," said Dr Zhou.
Another analyst, Great Zimbabwe University (GZU) lecturer Davidson Mabweazara Mugodzwa said Chamisa made a political blunder as a result of his overexcitement.
"It is an open secret that America supports opposition parties in Zimbabwe but it is never made public. Chamisa got carried away and ended up disclosing the secret which is quite unfortunate.
"We are all human and we make mistakes but I do not believe Chamisa would make up an enormous lie like that. That was just a political blunder and America also made a political manoeuvre to save face but I am sure that they made the promise," said Mugodzwa.top news
Share !